The navigator is pretty smart: Before we even put a single kilometer on the clock, even long before we shipped Humphrey to South America, she knew that we’d reach that point of no return in Peru. And that’s exactly what happened.

After that pretty exciting crossing of the Titicaca Lake it started raining and turned dark. We also noticed that the Peruvians are no better at driving than the Bolivians. As you can imagine, we were very happy to find a really nice hotel on the shore of the Titicaca Lake. After a very long and exciting day – we’re still on the same day that we left La Paz – we were just really glad to have a warm shower and a warm meal that was put in front of us. We were still struggling with two broken navigation devices from Garmin but at some point during that evening even that did not matter anymore. 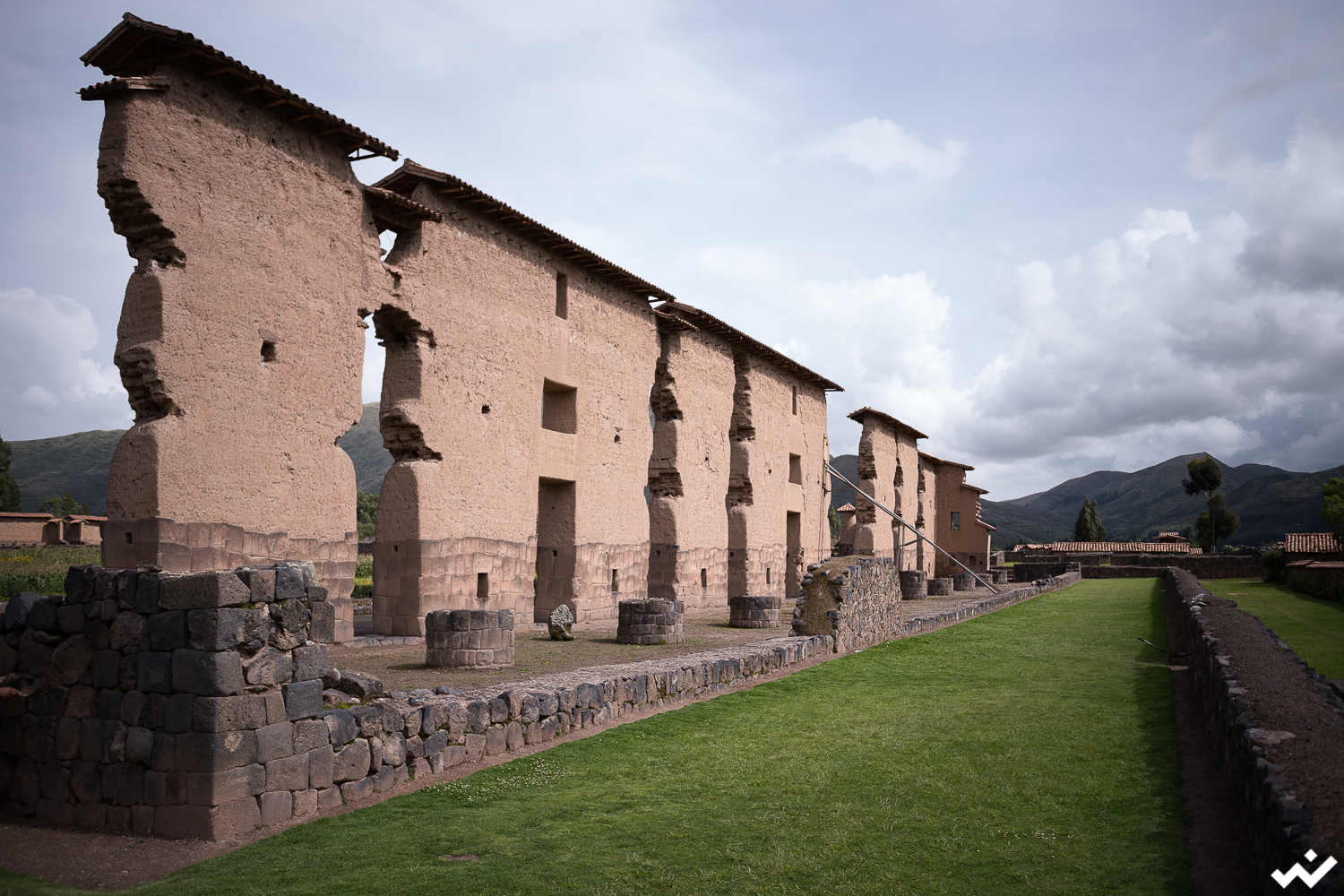 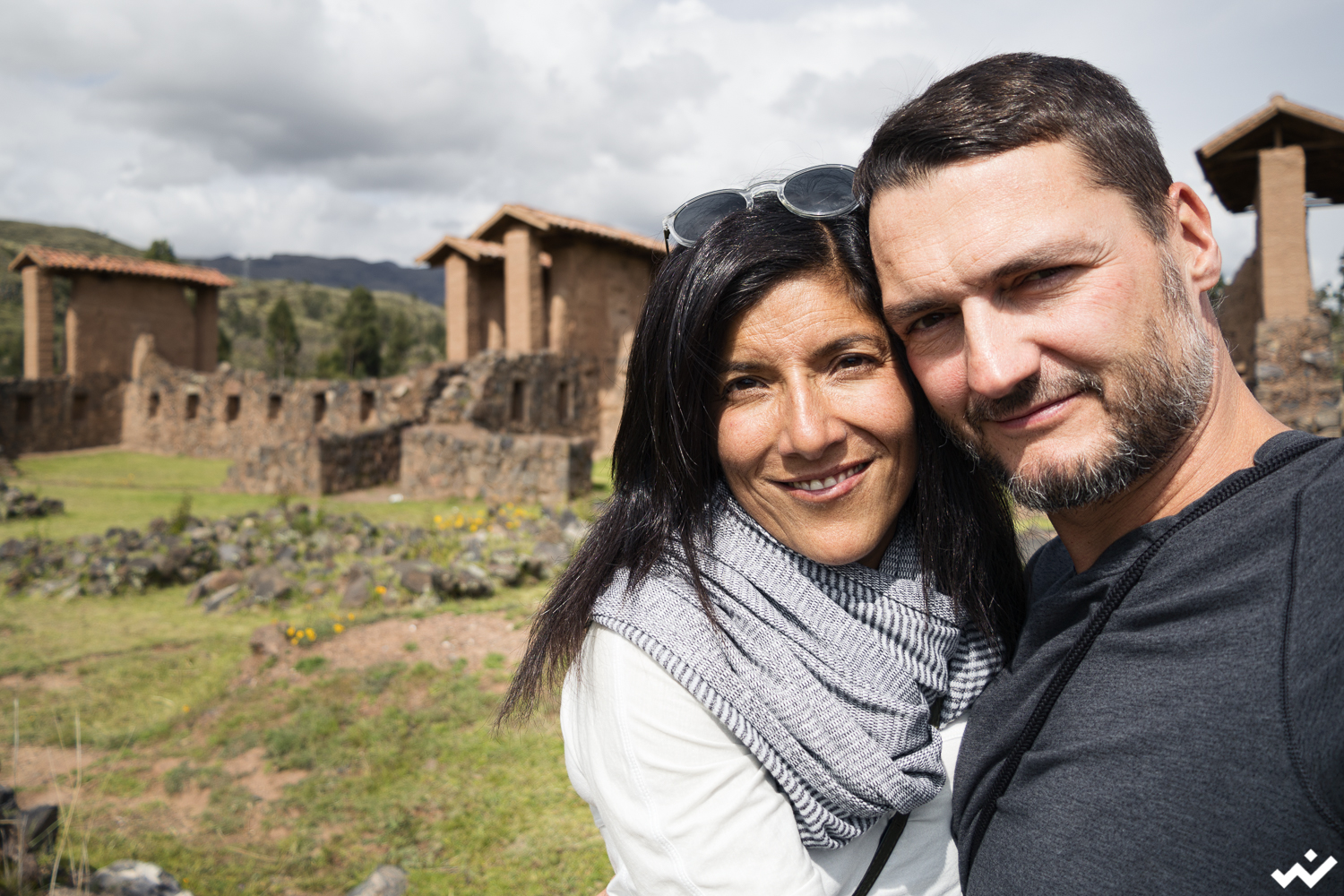 The next day we set off to the Sacred Valley, the center of the fantastic Incan empire. We were still en route to the place where we wanted to take another break. On our way there, while wobbling away through the Sacred Valley, we noticed that we were over-satiated. We had seen and done so much in the last few months, that we just were completely overloaded. We did not have any capacity for new impressions anymore. But as these things go, realisations like these need time to settle in. And then we obviously needed to verify the realisation. So we spent the next couple of days visiting umpteen Incan fortresses and learned a lot about the Incans and the Incan Empire. How clever their farming methods were, how large the Incan Empire was at the height of their success, that Túpac was an Inca Leader before he turned into a rapper and was shot, and finally that the good Christians, this time the Spanish ones, once again did a great job. Every Incan temple they found was destroyed and a church was built in its place. That’s what good Christians do. 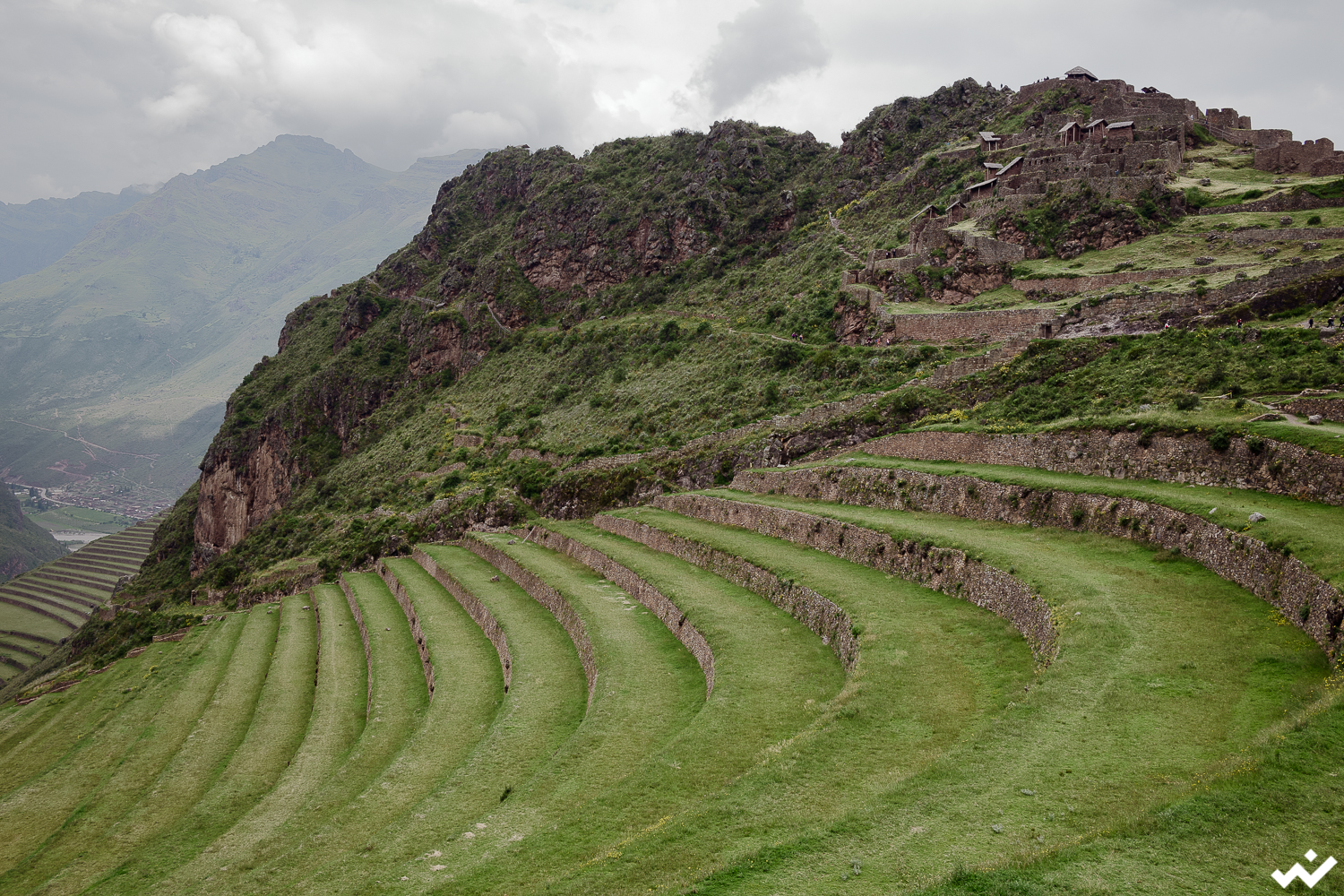 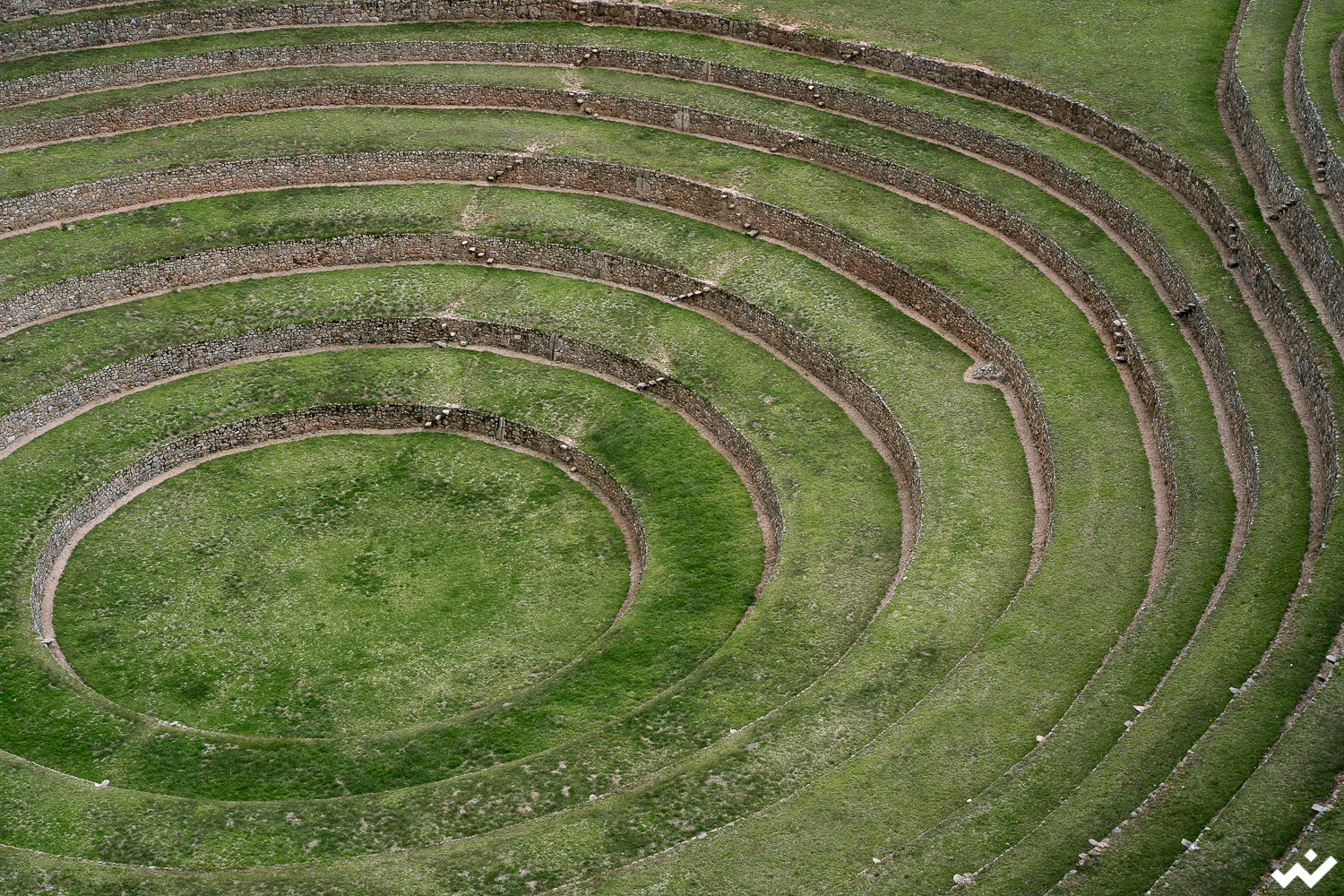 I also noticed that I did not want to drive anymore. At this point we had covered 13,500 kilometers, having driven altitude changes of 144 kilometers upwards and 137 kilometers downwards. All of it at an average speed of 25 kph. This means we spent roughly 550 hours – including one or the other stop – driving Humphrey from A to B. Considering the traffic situation in Bolivia and Peru which prevented us from doing anything but looking straight ahead at the road, focusing on the traffic, and taking into account that at every village in the Sacred Valley – so basically constantly – we had to cross at least four speed bumps or even more as sometimes speed bumps were just put in the middle of the road with no village in sight, you can imagine that driving at some point just is no fun. It does not feel like traveling anymore but rather like rush hour back home. And none of you would consider that fun, right? 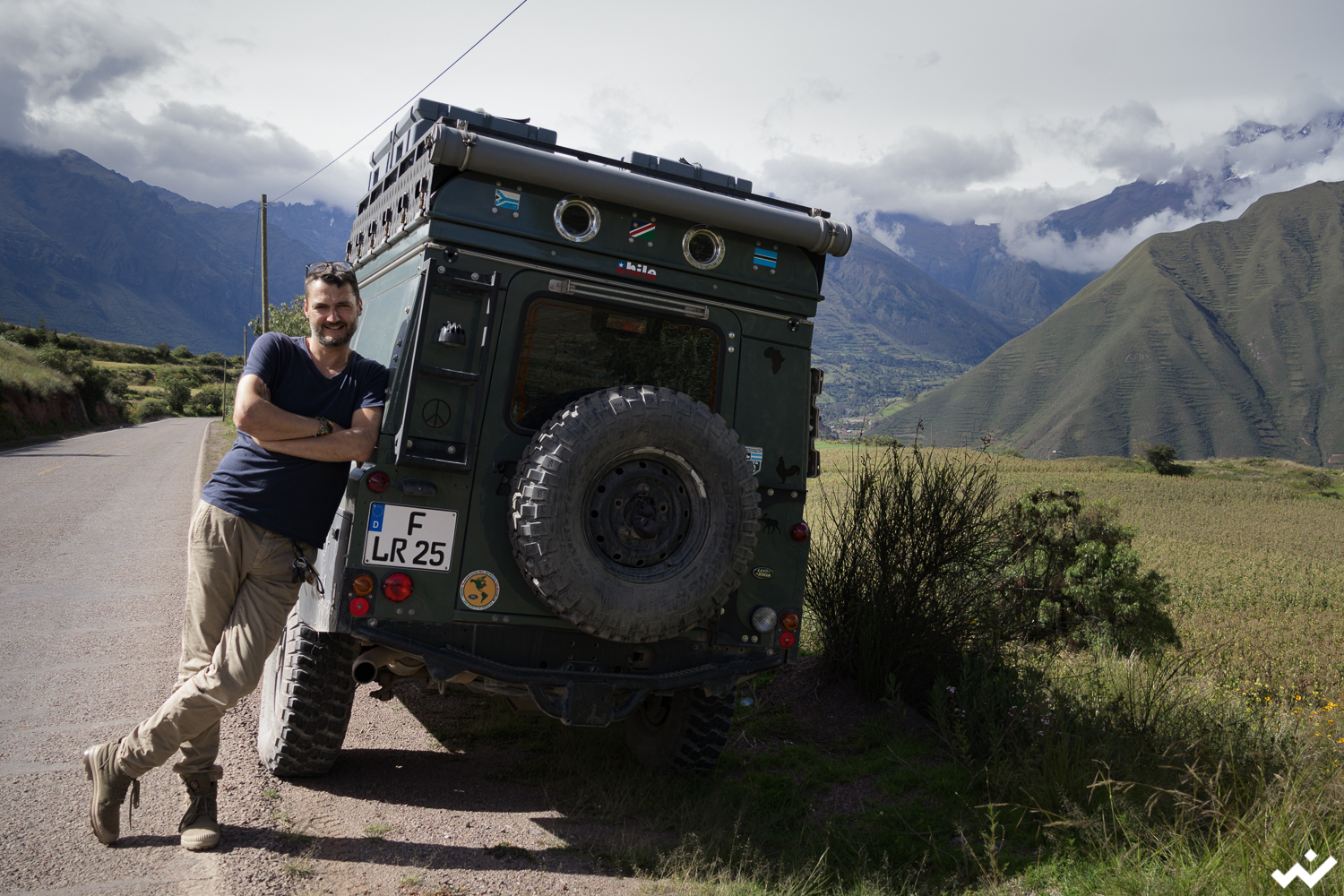 But then finally, we arrived in our little house in the Sacred Valley. We had planned to spend two weeks there to find some peace and quiet and make some space for new experiences and impressions. Anyone who knows us, can guess that this did not work out too well. So we gave into our restlessness and continued jumping around the Sacred Valley. We visited ruins but also several markets and souvenir shops. The Sacred Valley clearly is touristically developed. And after a while we noticed that despite being in different places, the stuff on offer was always the same. A clear sign of how much of a touristic hotspot the Sacred Valley is. 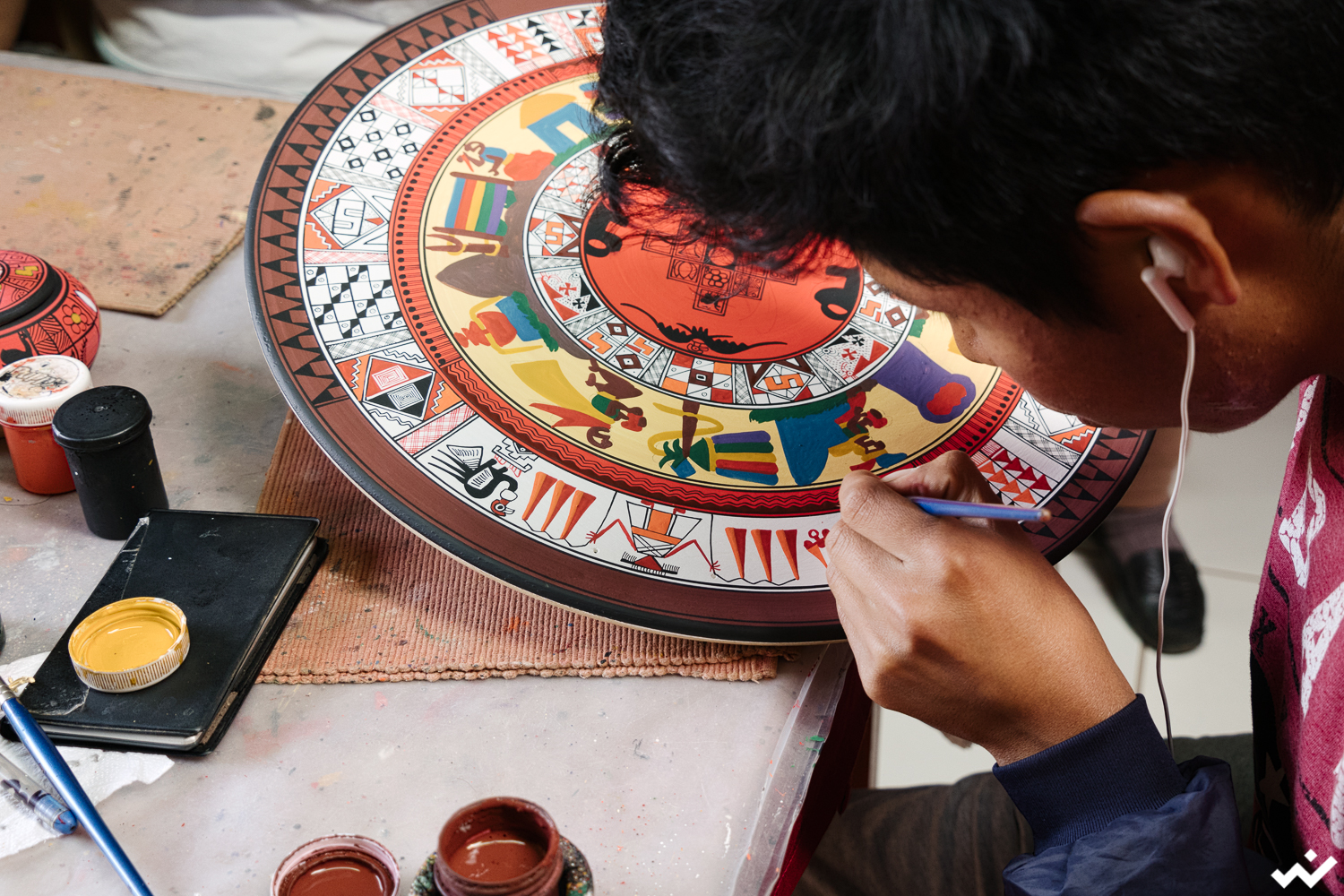 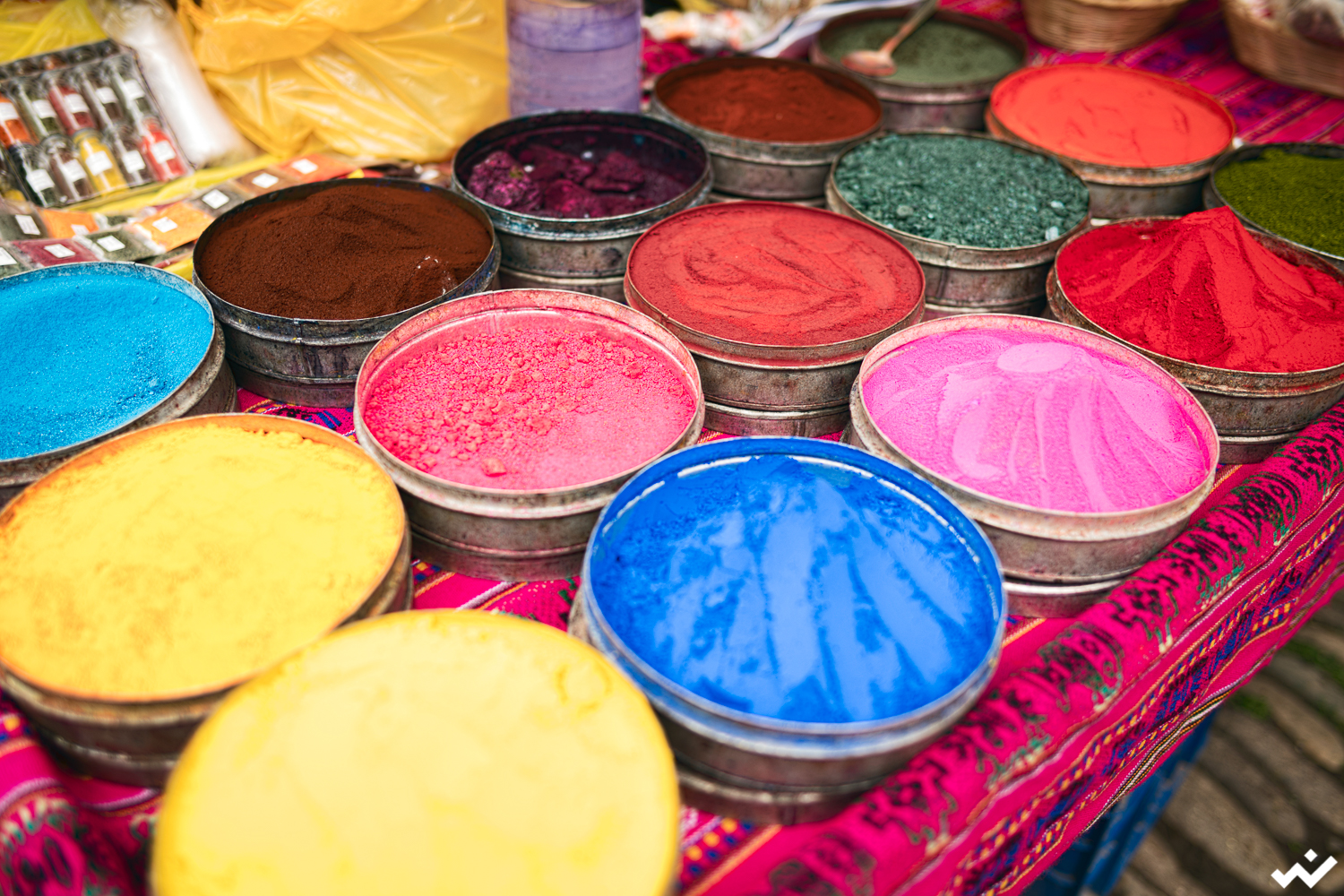 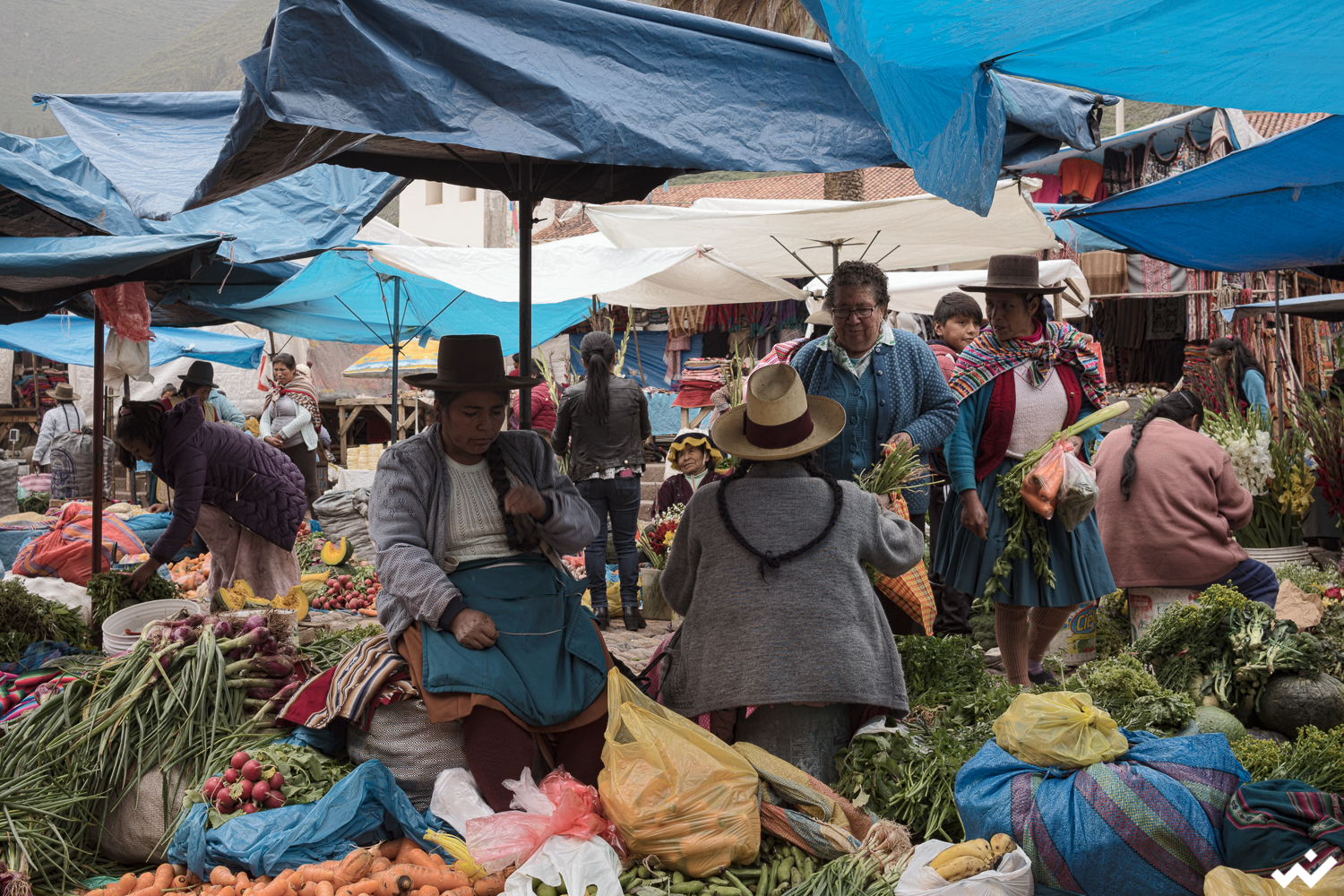 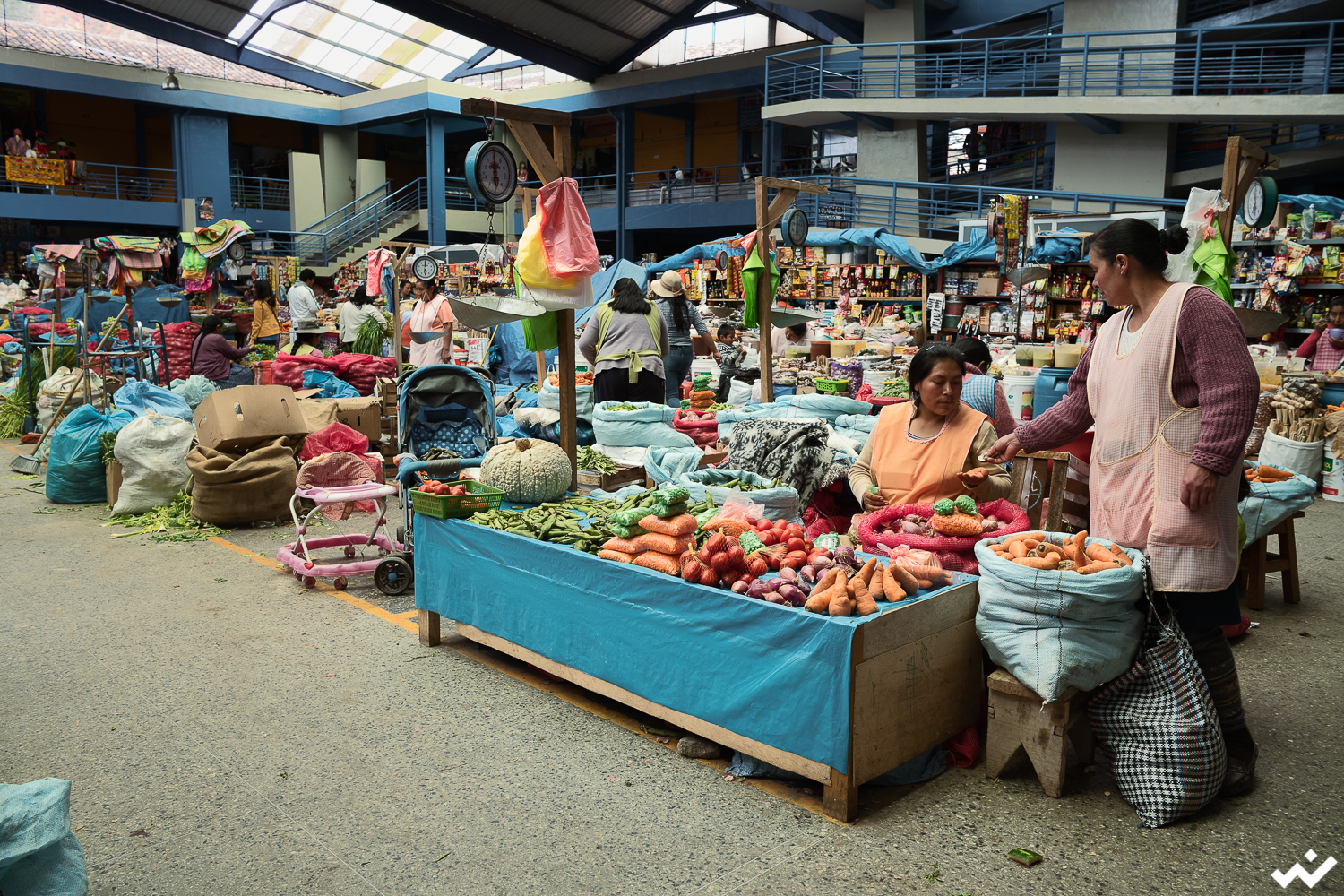 We tried to stay away from the crowds as much as we could. So we were out there whenever everybody else was having a meal or before everybody else got started in the morning. Worked out quite well for us. The only problem was that this meant we were driving during the local rush hour – which resulted in one or the other nervous breakdown of the driver. Leaving that aside though, the Sacred Valley is a really pretty place. There’s loads to see and do, it’s colourful – apart from the ruins – and there is a huge selection of potatoes. There are supposed to be more than 5,000 types of potatoes in Peru. Unimaginable. The landscape is beautiful, rustic and we had a wild mix of bright sunshine and downpours of rain during our time there, changing from one minute to the next. And last but not least: Baby Alpacas are very cute. 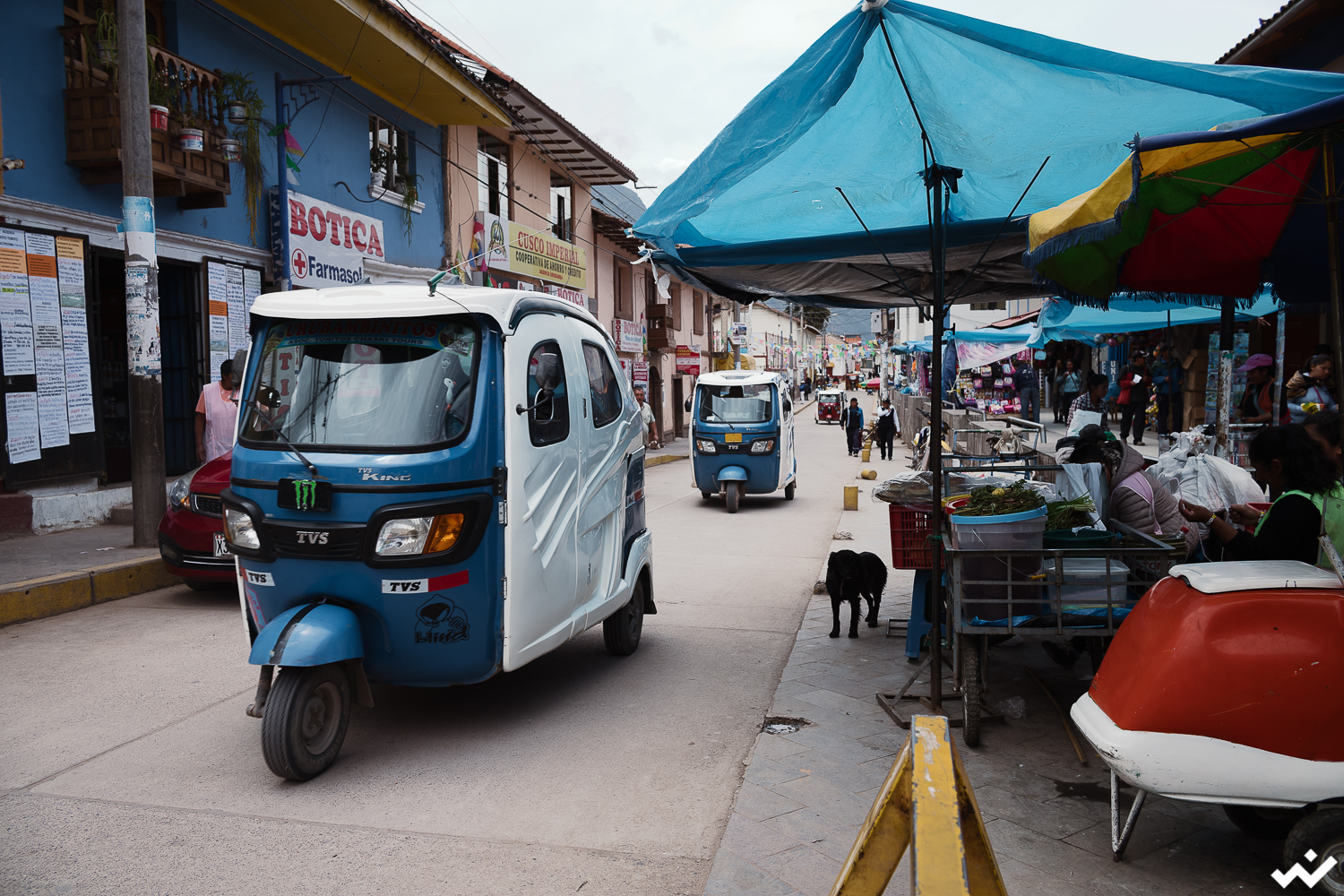 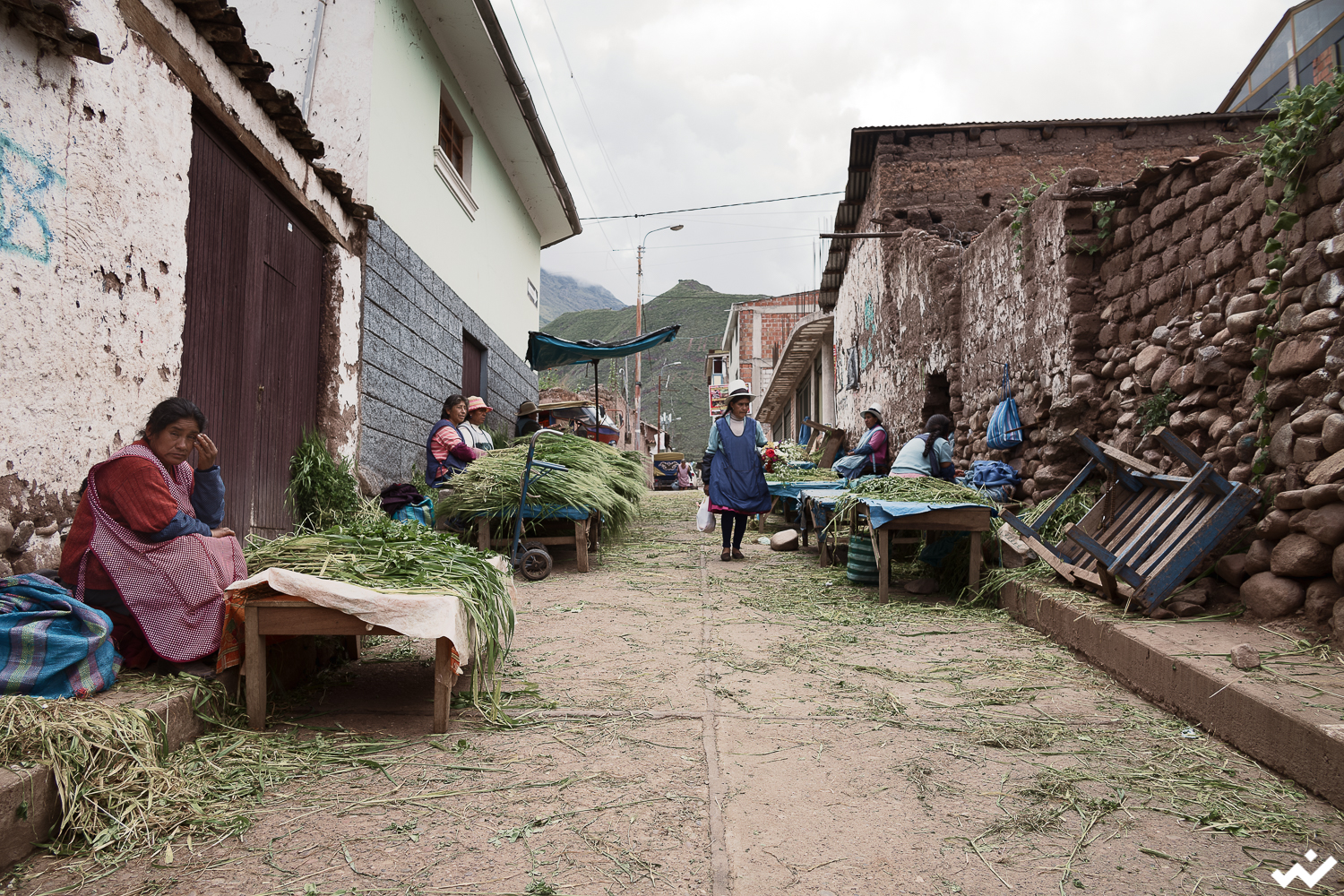 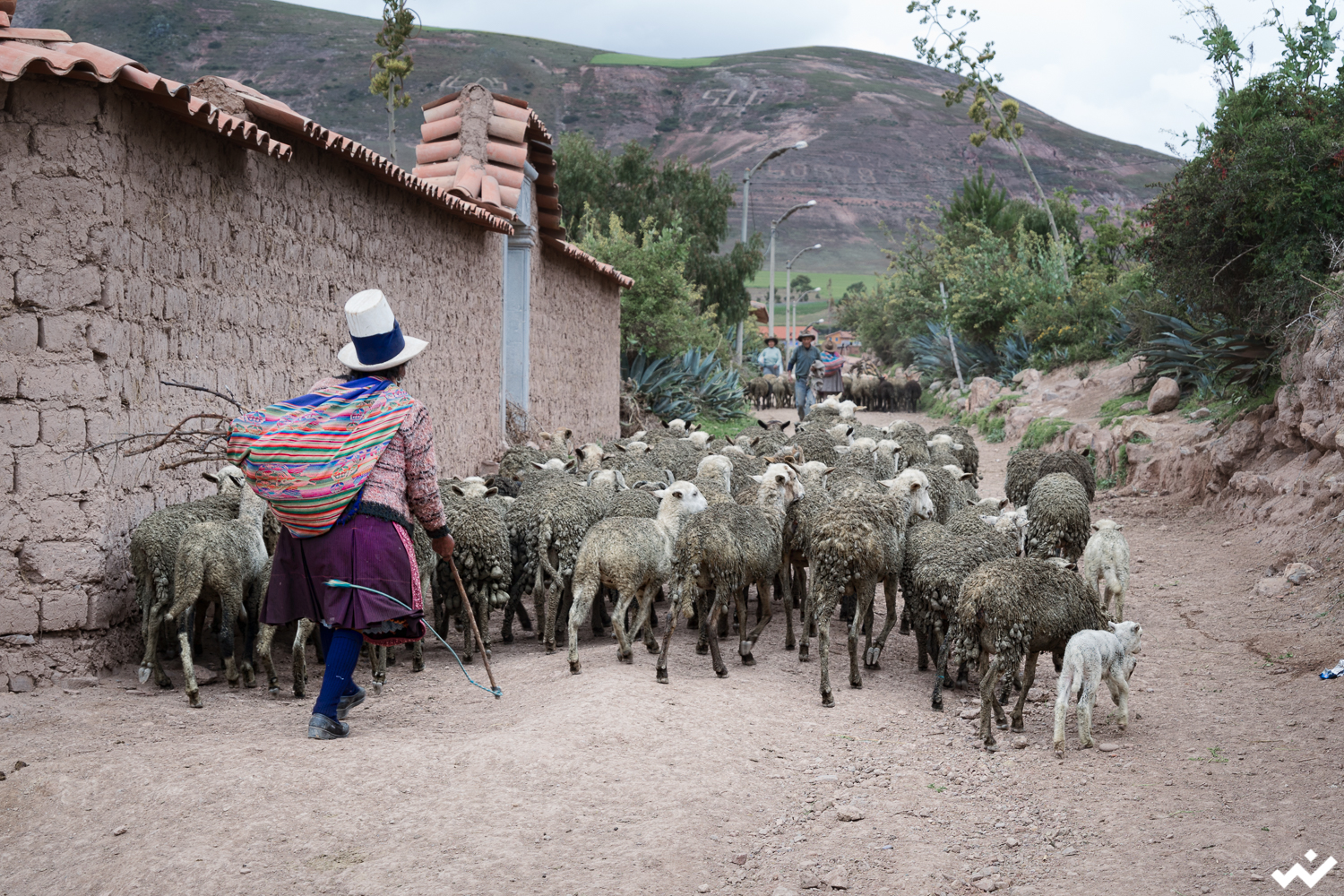 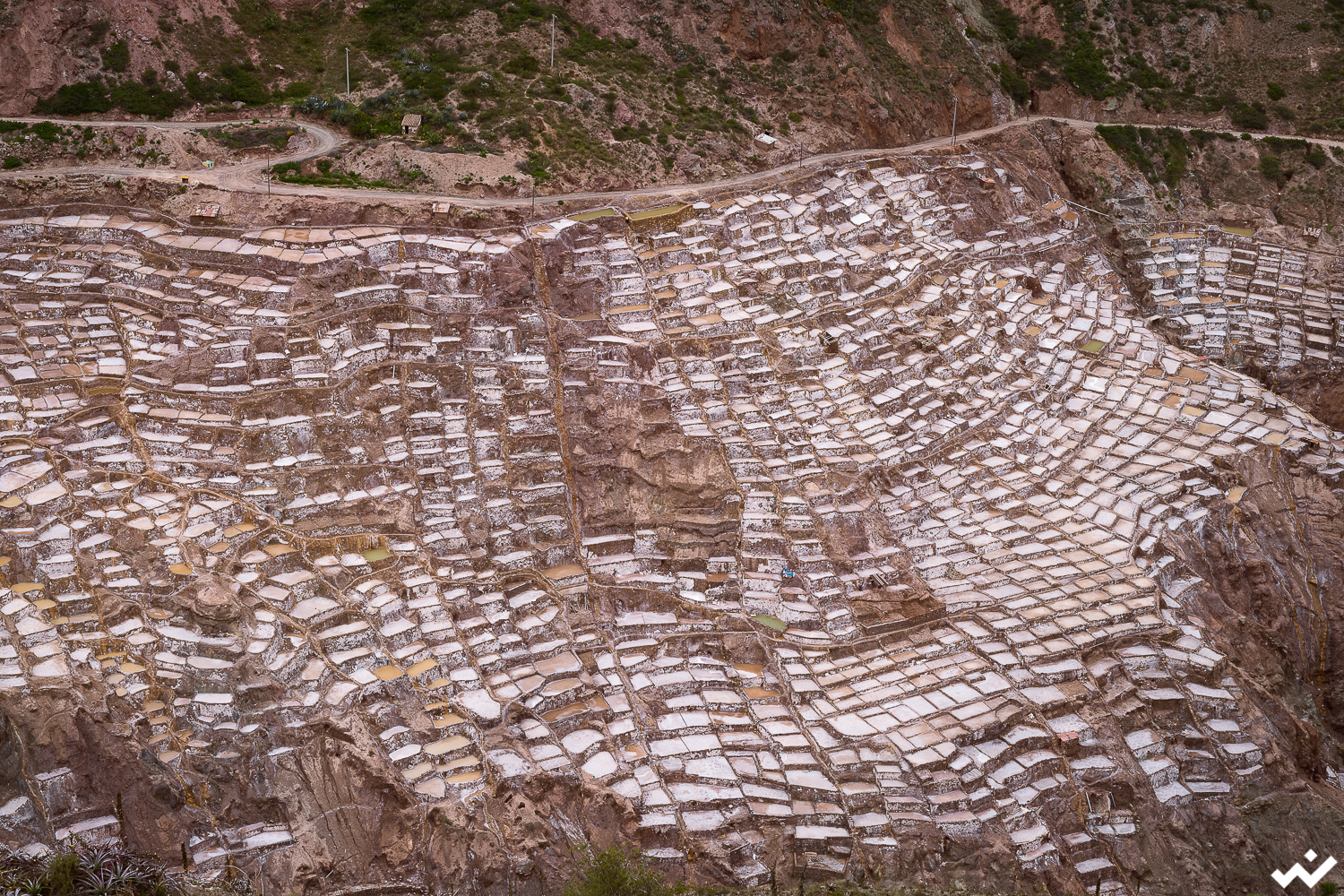 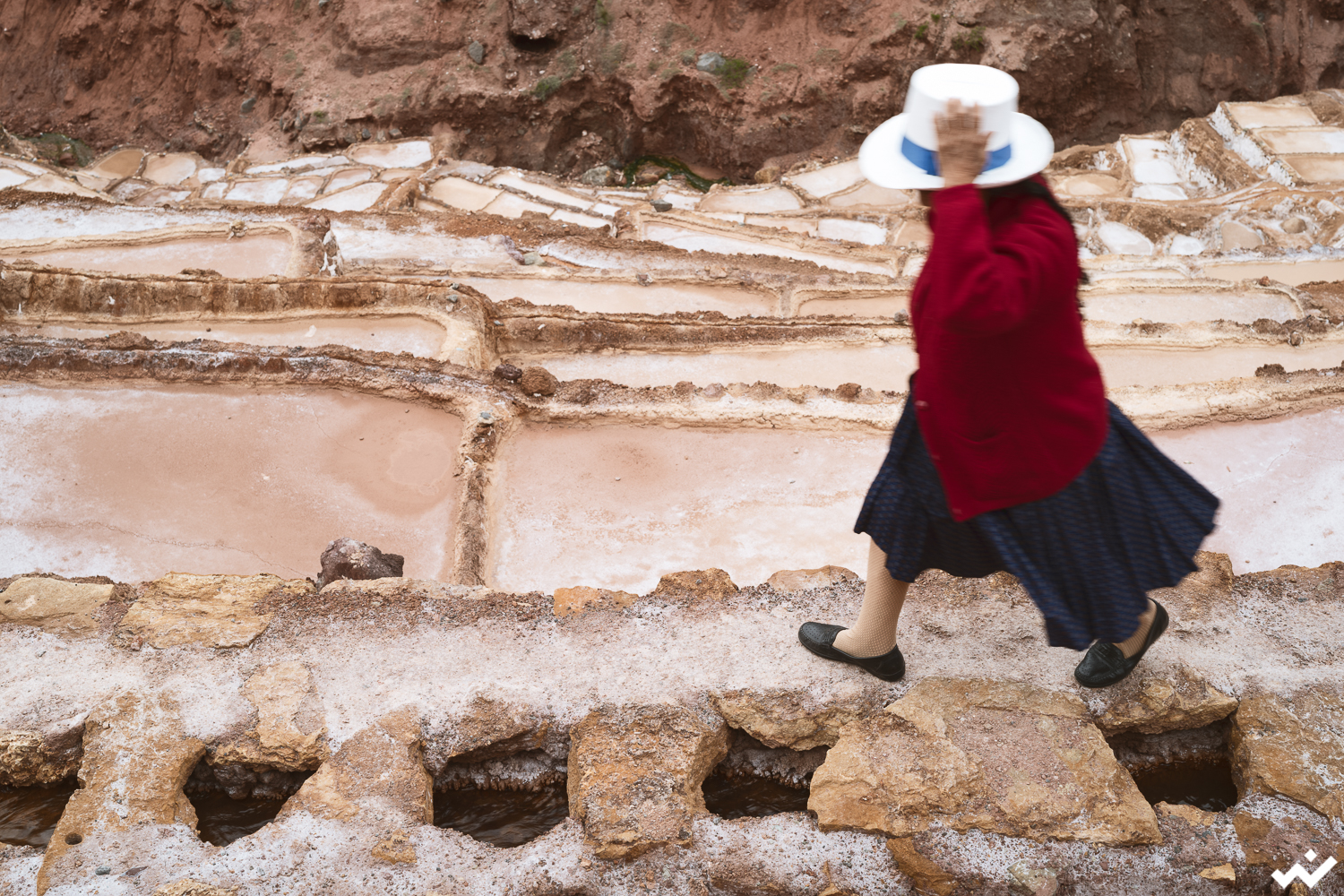 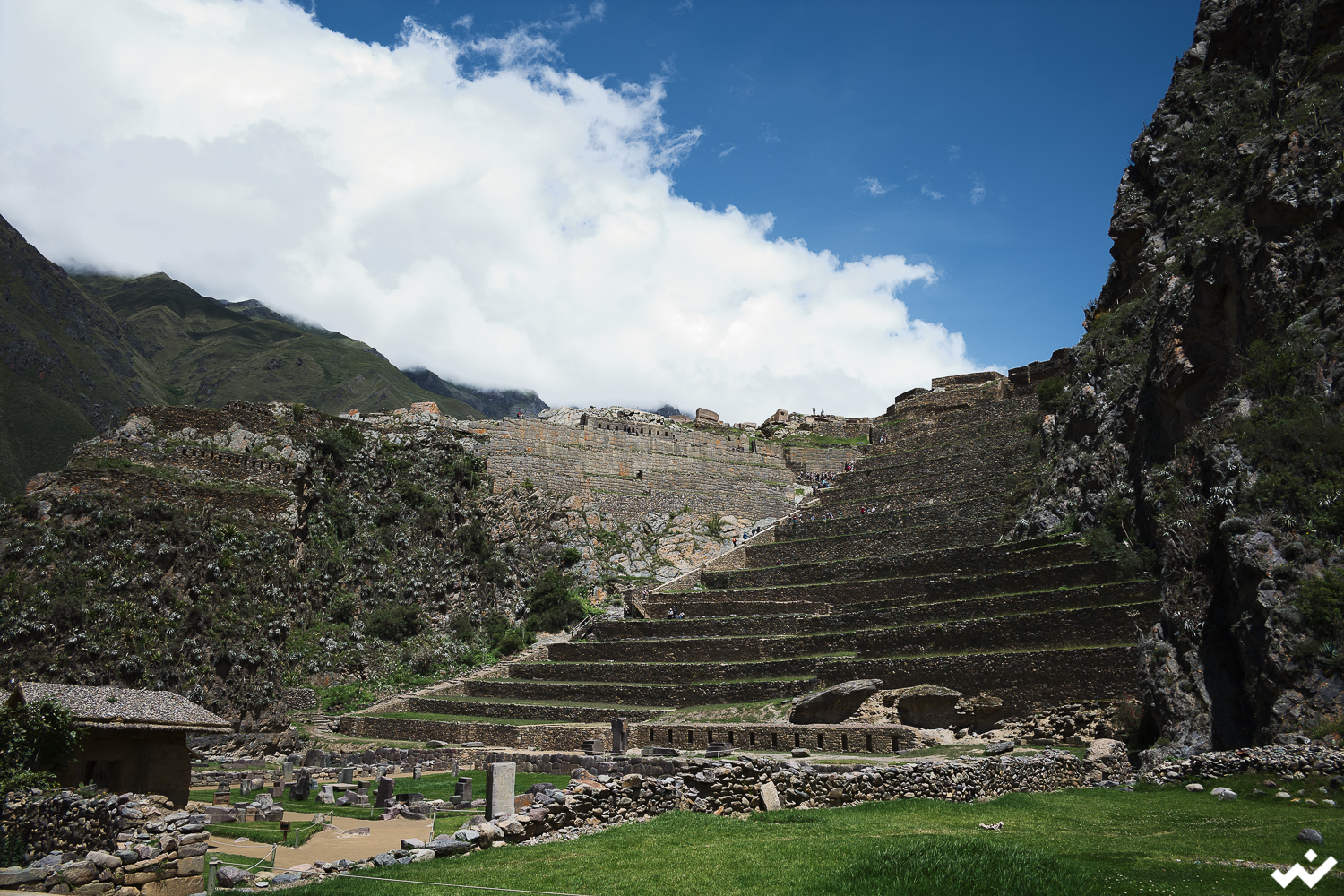 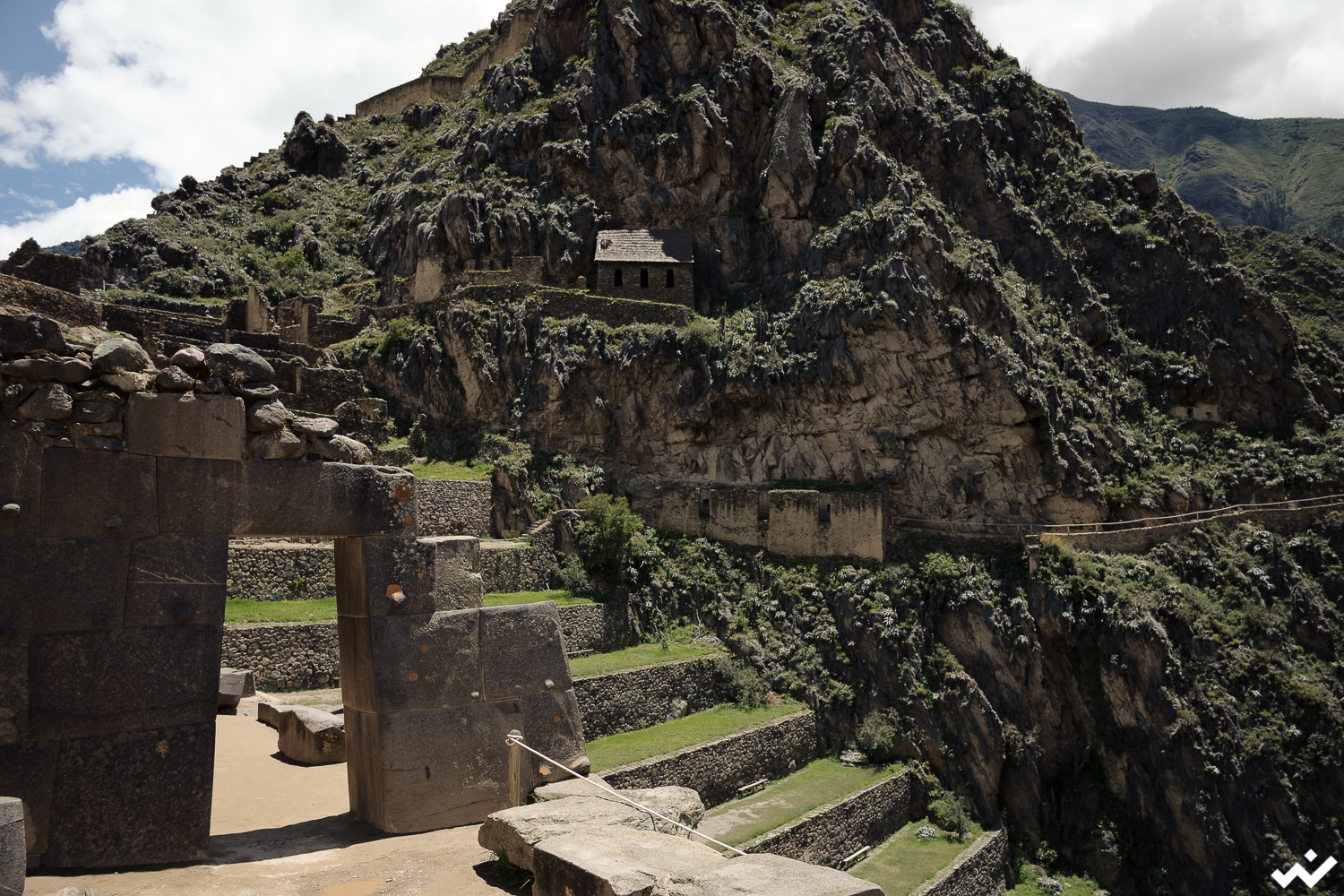 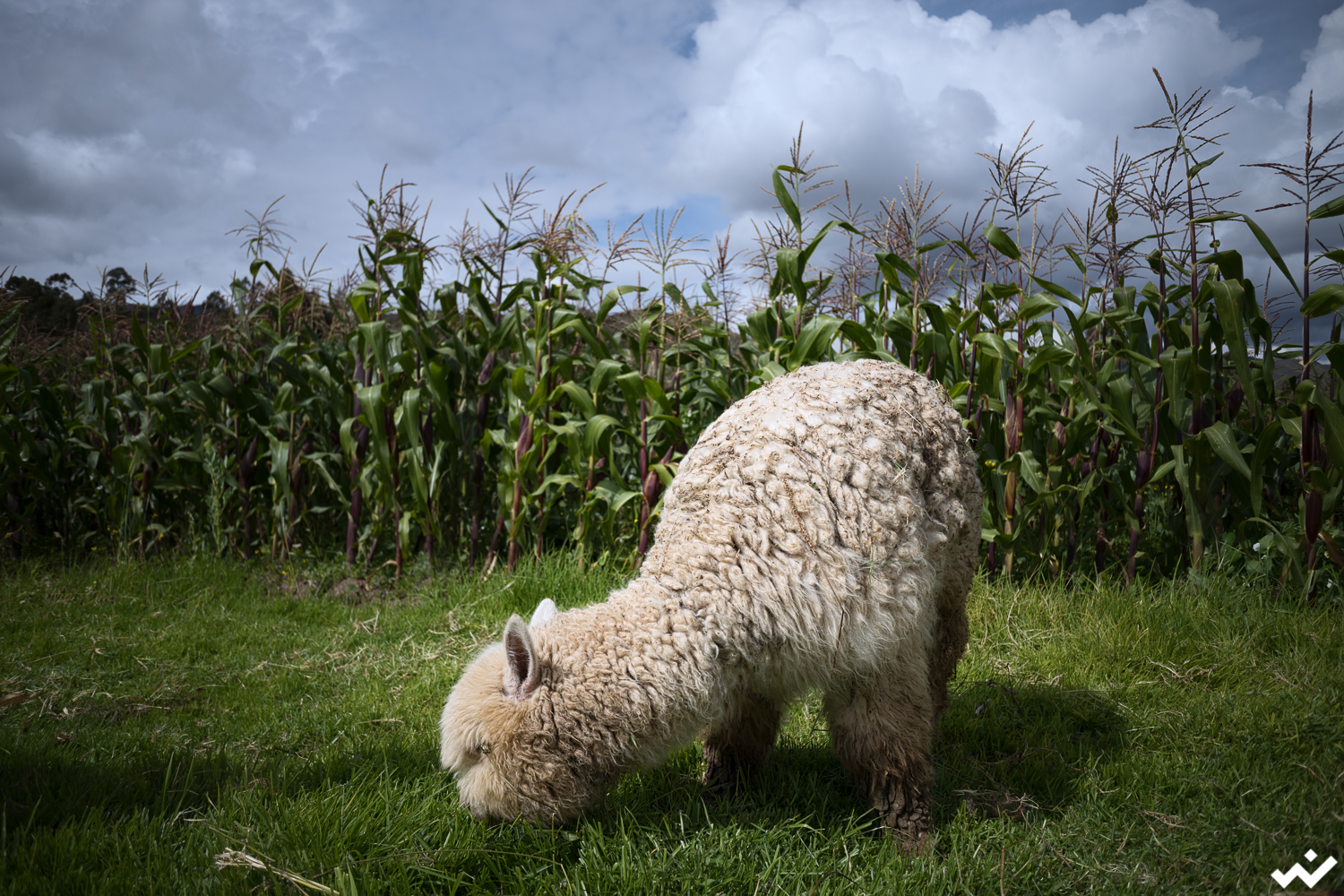 The last major sightseeing event on our tour of the Sacred Valley obviously was Machu Picchu. Probably one of “the” tourist attractions in the world, so exactly our kind of thing. But we decided to put up with all of it for the sake of seeing it. And we must say: It really is worth it. And this despite the fact that we were oversatiated and really did not have any capacity for any more. It’s just really impressive. But let’s tell you the story from the beginning: One way of getting there is by foot, via the Inca Trail for which you need to register months in advance as access is strictly limited. If you thought this was the way to get there all alone, in harmony with nature, think again. All of this is only possible in a guided group, walking the trail for several days with the same group of people. The other option is to take the train. We decided for that. 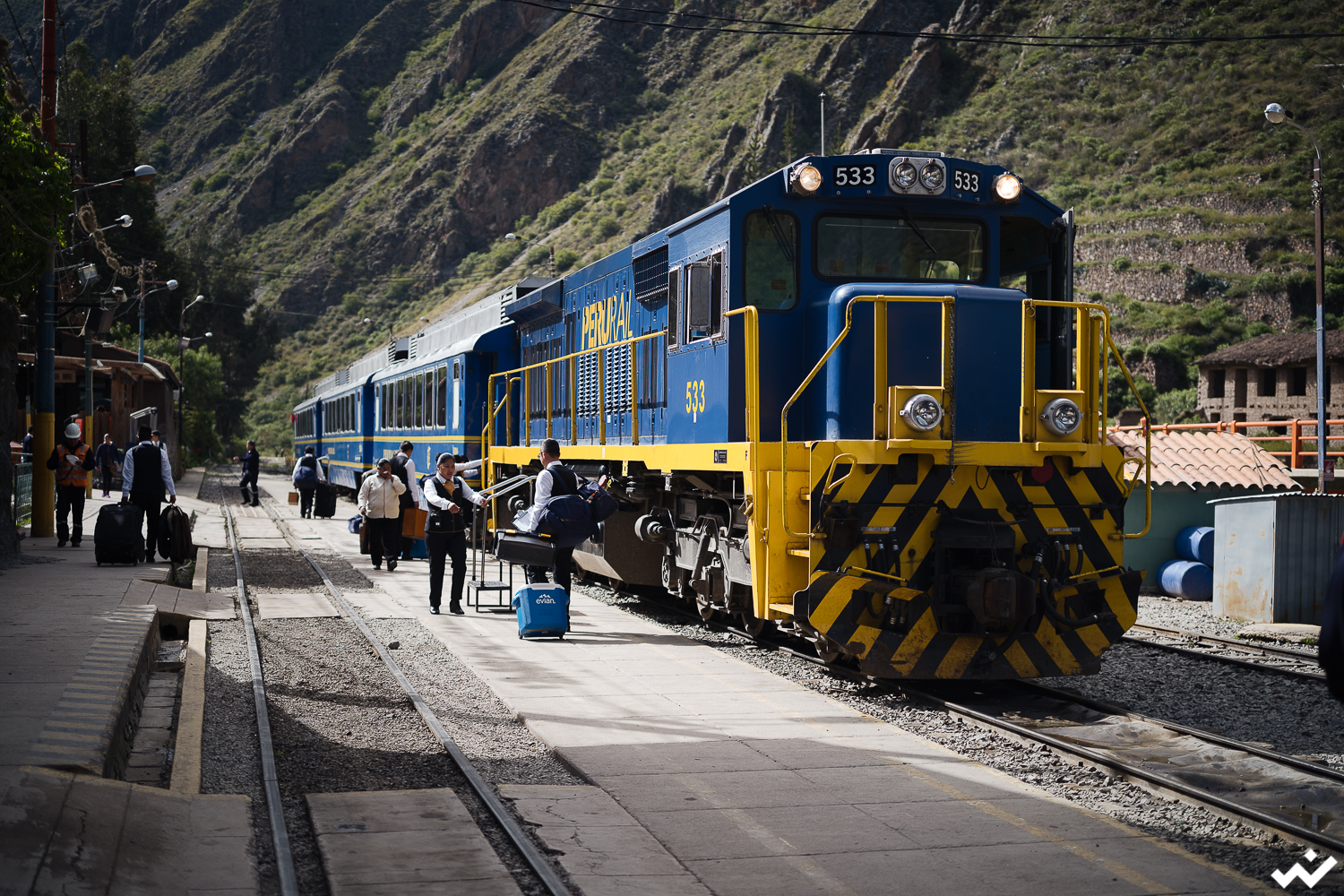 Again, you quite foreseeably are not alone in doing so. And whether you like it or not, you are part of a huge and unique machinery. The highlight of our trainride was the fashion show by the train conductors. Obviously you were able to buy the “fashion items”. The train ride gets you to a town, consisting purely of hotels, restaurants, souvenir shops and markets. You need to work your way through the town to the bus stop, a bit like those defined walkways in modern airports, just not modern. The bus then takes another 20 minutes, winding its way up the switchbacks to the actual tourist attraction. It’s one big procession up to Machu Picchu. And again, whether you like it or not, you cannot escape it. Finally arrived at the top, you are not allowed to enter without a guide but at least you can choose one. We resisted all the guides who tried chumming up to us and decided for the coolest guy, sitting on the wall and looking like he really could not care less: Odhy. We decided to go with him, and it was a great choice. We had finally arrived. And after it had rained most of the day, even the sun came out for a bit, breaking throught the clouds. 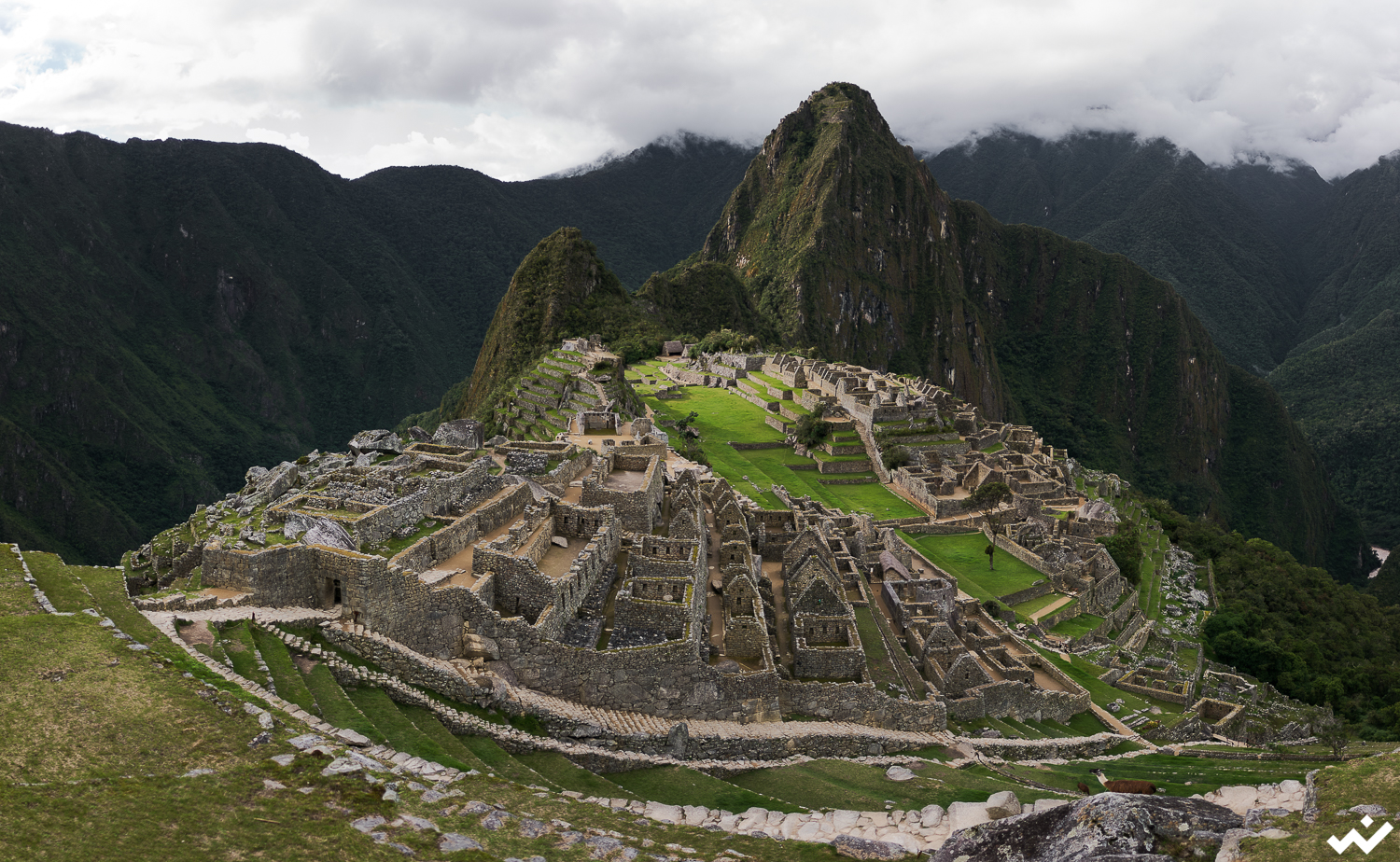 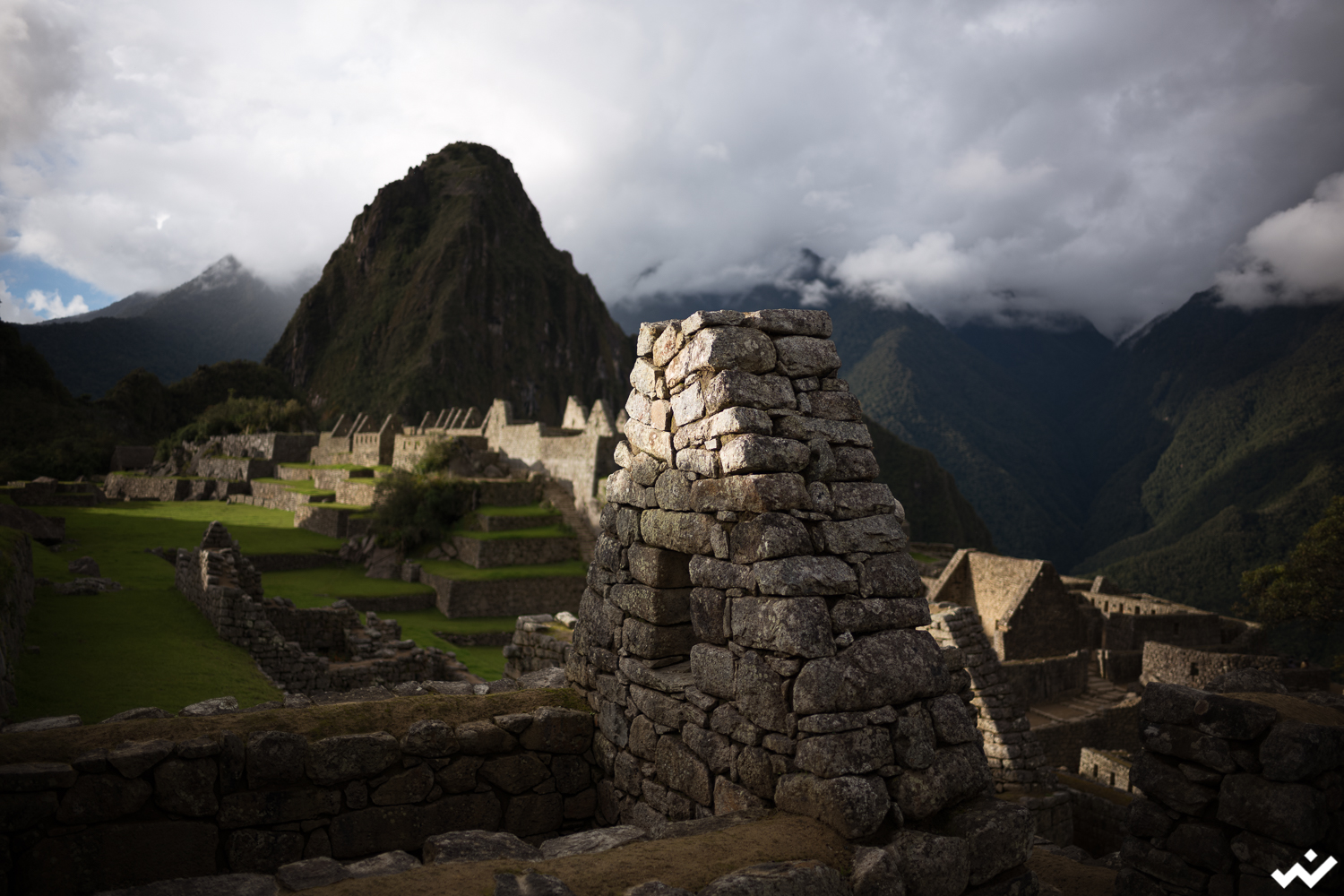 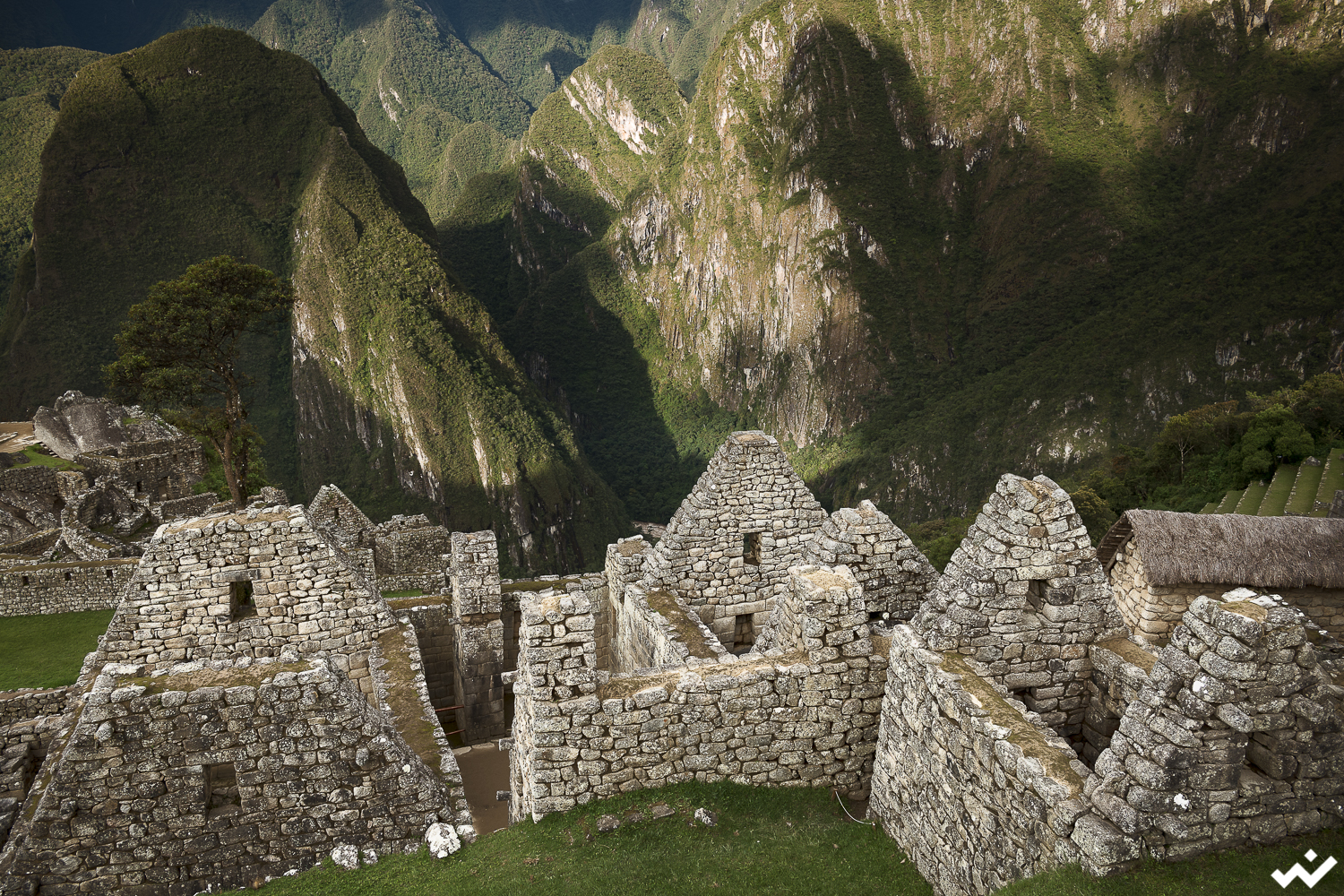 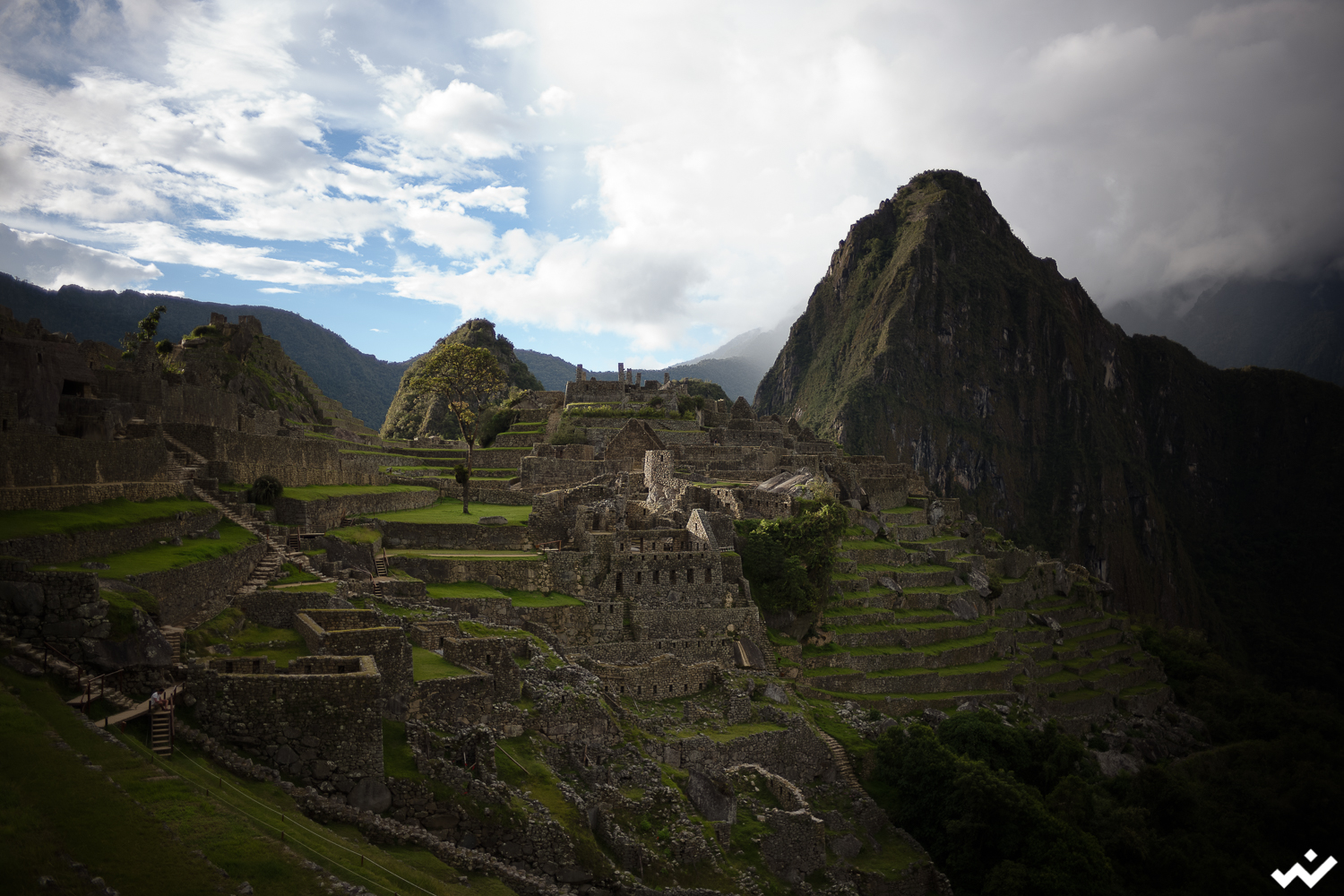 Machu Picchu was never completed. The Spanish prevented that. What is so special about this place is that the Inca left Macchu Picchu before the Spanish even arrived. They did so to protect the site and to prevent the destruction by the Spanish as was the case with most of the other Inca sites. And somehow then Machu Picchu was forgotten. It was too far off, too difficult to reach and the rain forsest did its part in helping it disappear. But only until the archeologist Hiram Bingham re-discovered Machu Picchu at the beginning of the 20th centure and brought it back to the attention of the world.

If you are wondering why there are hardly any people in our pictures – we deliberately decided to spend one night in that completely overpriced hotel directly at the entrance gate to have the opportunity to hang out at the site for as long as possible. It was a fantastic evening and with every minute we spent watching the sun set in this amazing place, more and more people left the place. Until we were alone with just a few other likeminded people who enjoyed the sight as much as we did.

The next morning it looked like a completely changed world. Busloads of tourists were already at the entrance gate long before the site opened at sunrise. It was raining, all of them were wrapped in brightly coloured capes and when the gates were finally opened, all these colourful figures rushed in and spread within like a virus. What a contrast to the majestic sight we had the evening before. 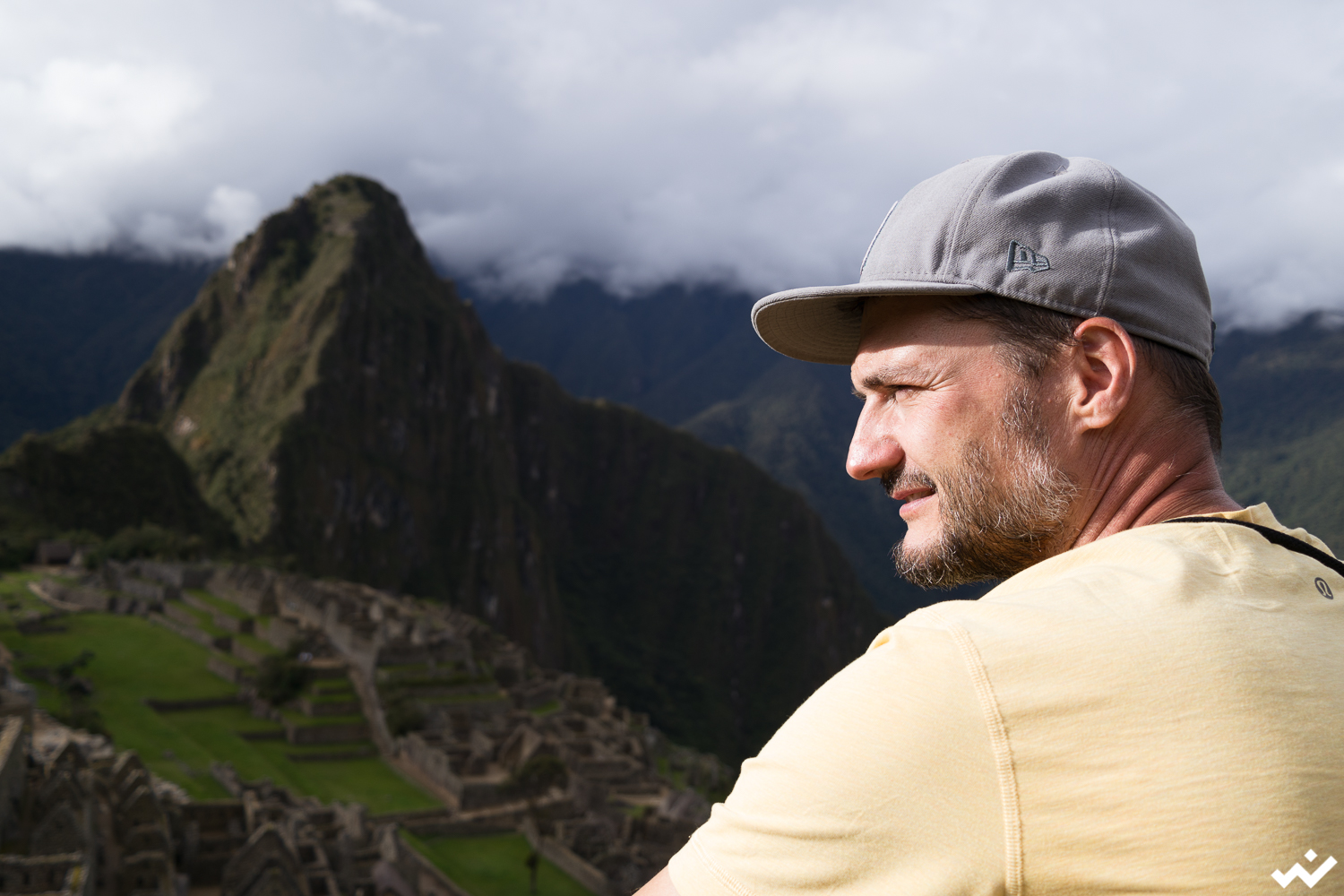 The Incans left Machu Picchu. They had to give up their aspirations and hopes for their empire. They reached a “point of no return”. And while we travel in much more pleasant circumstances and particularly nobody was out to kill us, we also reached that point. We gave up our hope and aspiration of driving up to Colombia.

It was not without pain but we had to admit that we just could not take in any more. We had been traveling for 99 days at this point. Had we decided to carry on northwards, we would have spent 50% of our remaining travel days in the car and would have moved at an average speed of 50 kph. Imagine all of this with an infrastructure set-up that was unlikely to improve and a load of impressions that really did not leave much room for anything new. We therefore decided to turn around, drive back to Chile and send Humphrey back to Germany where our story began.