We never guessed that we would ever travel to 5,000 meters (16,400 feet) of altitude. And even less so with Humphrey. Accordingly, we were quite excited. Particularly as our experience on our excursion to the Salar de Tara two days before was not the best, when I felt quite dizzy at 4,800 meters. 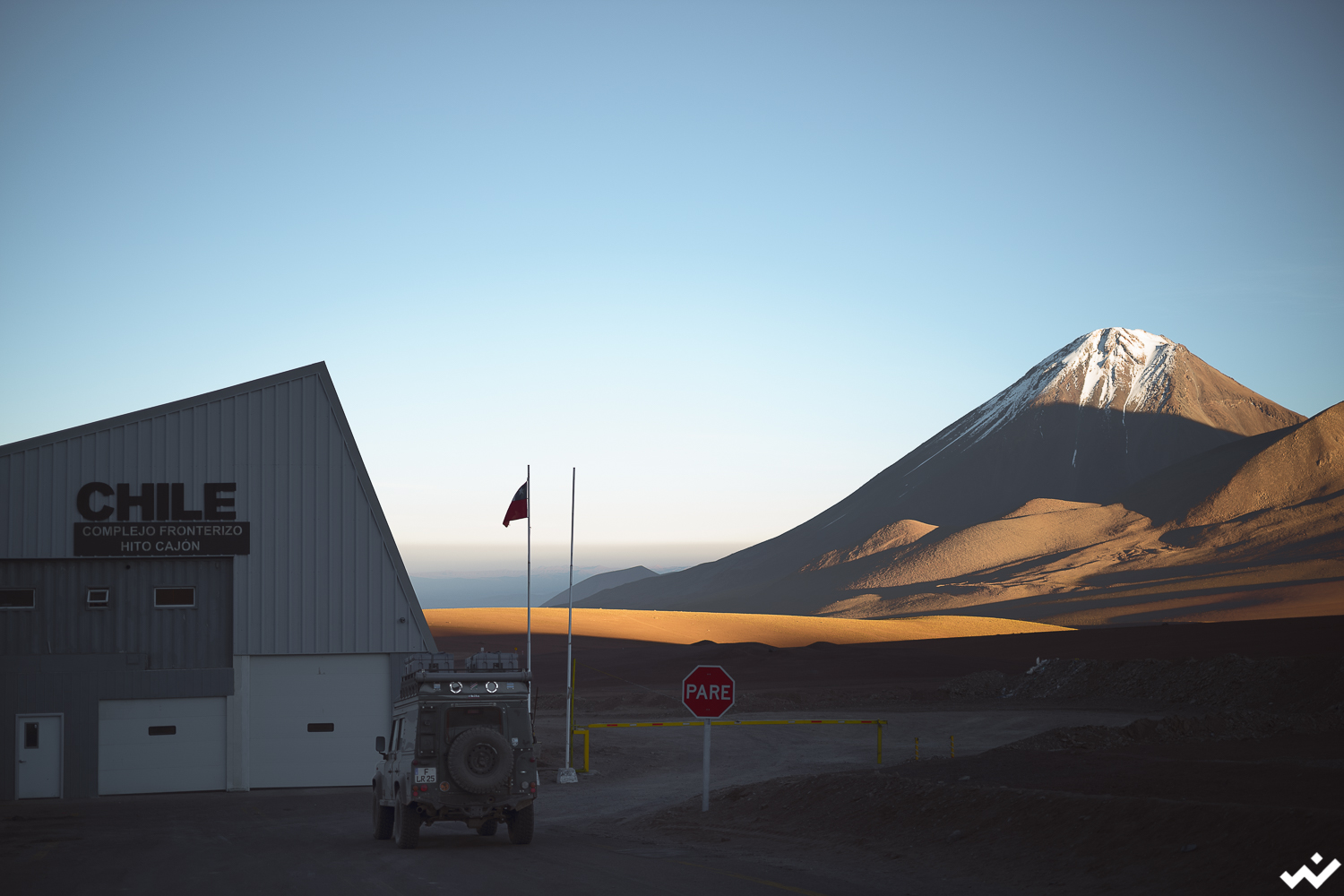 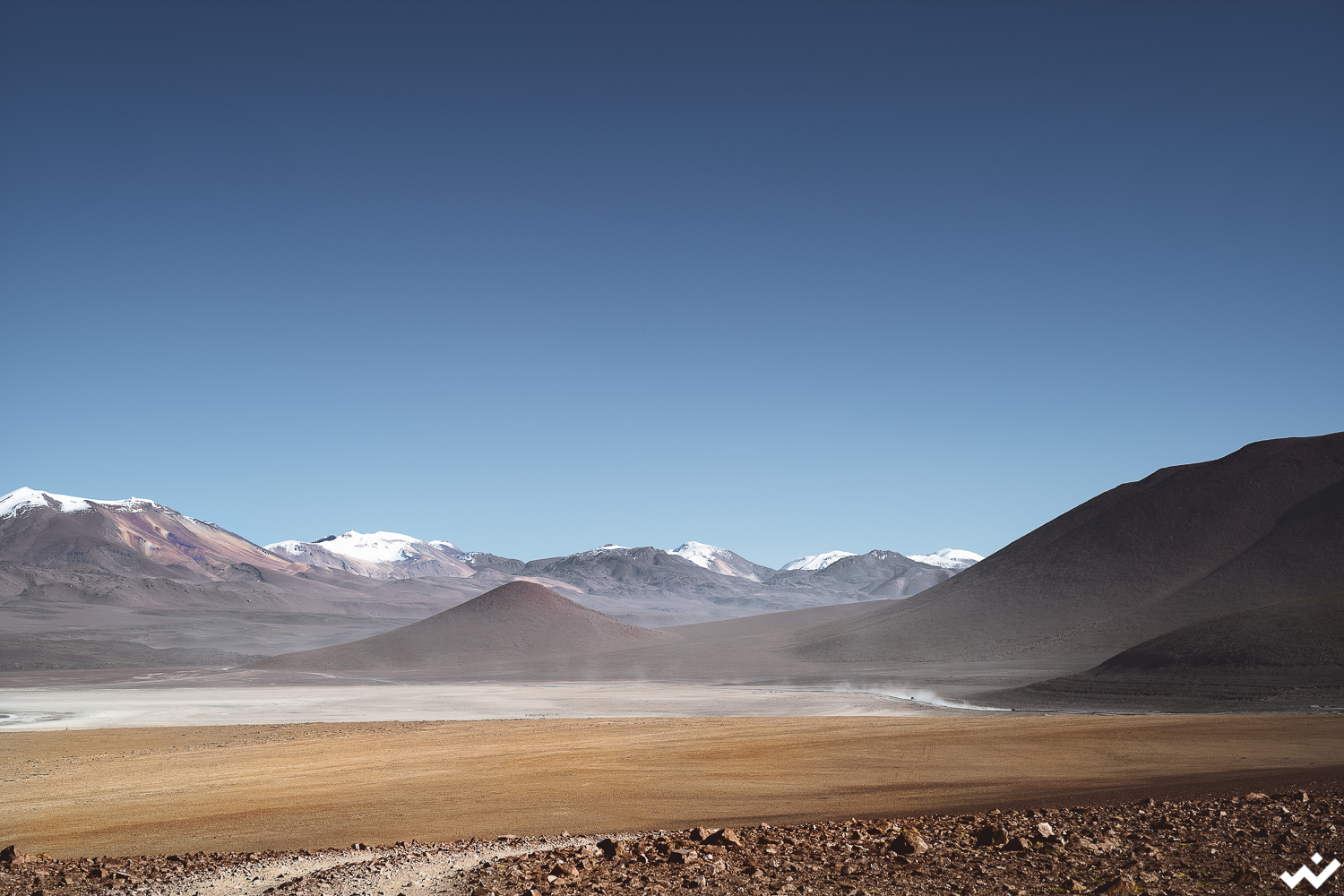 Maybe it is also due to the 2,300 meters in altitude gain, covered within an hour after leaving San Pedro de Atacama, headed towards the Bolivian border. Who knows, in any event, we were really excited.

In addition, we were very excited as there are a lot of myths around the infamous Laguna Route. There is a huge amount of storytelling around it. For one, there is the altitude issue, an undeniable fact. Furthermore, there is the freezing cold at night, i.e. minus degrees even in summer. How will our diesel react? And finally the solitude. For days on end not a soul to be seen. What if something happens? What if we run out of fuel, we get stuck, or the altitude gets to us? Many also tell you about the difficulty of the route, river crossings and the likes. The longer you research, the more fairy tales you can come up with. The reality is a bit different though. 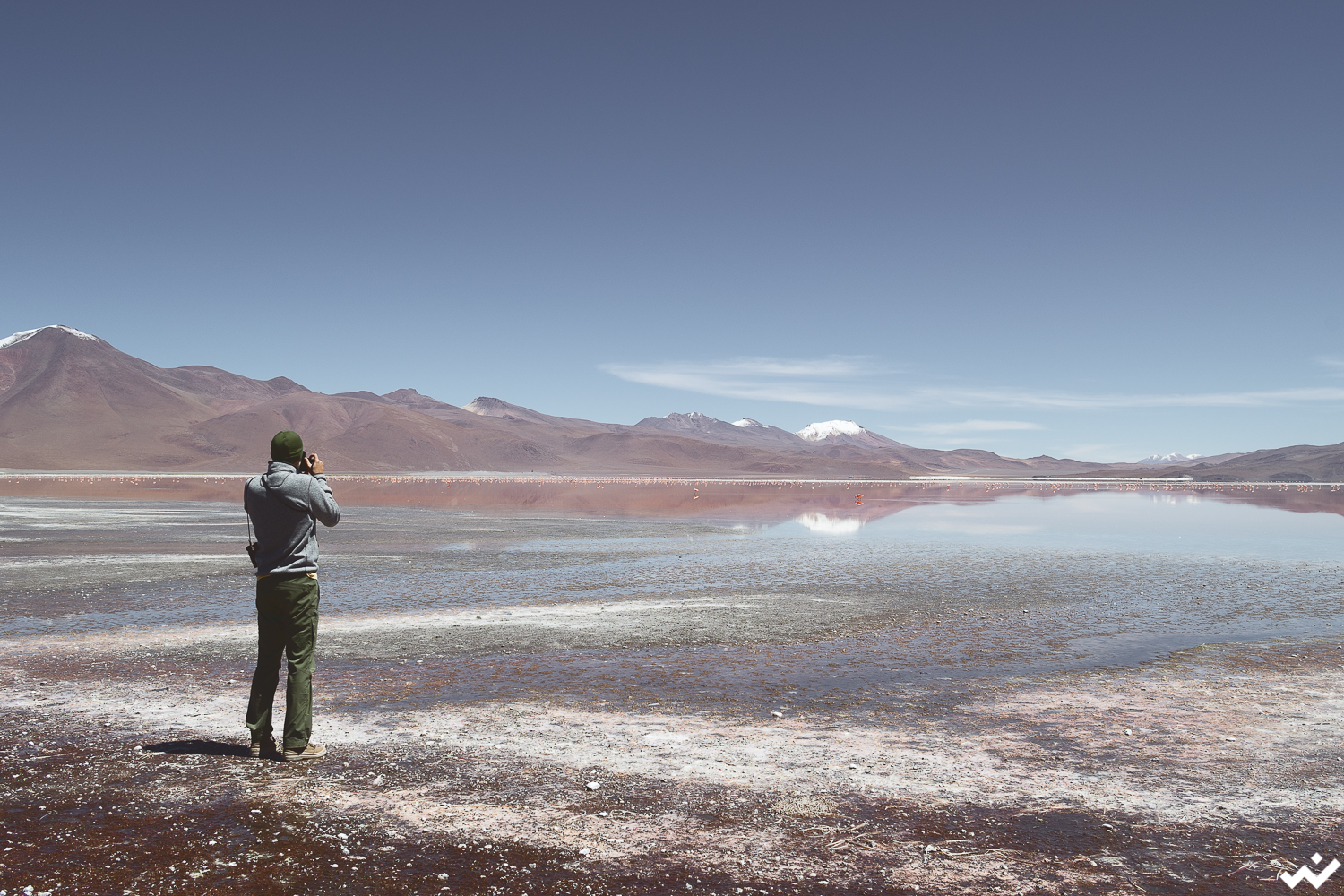 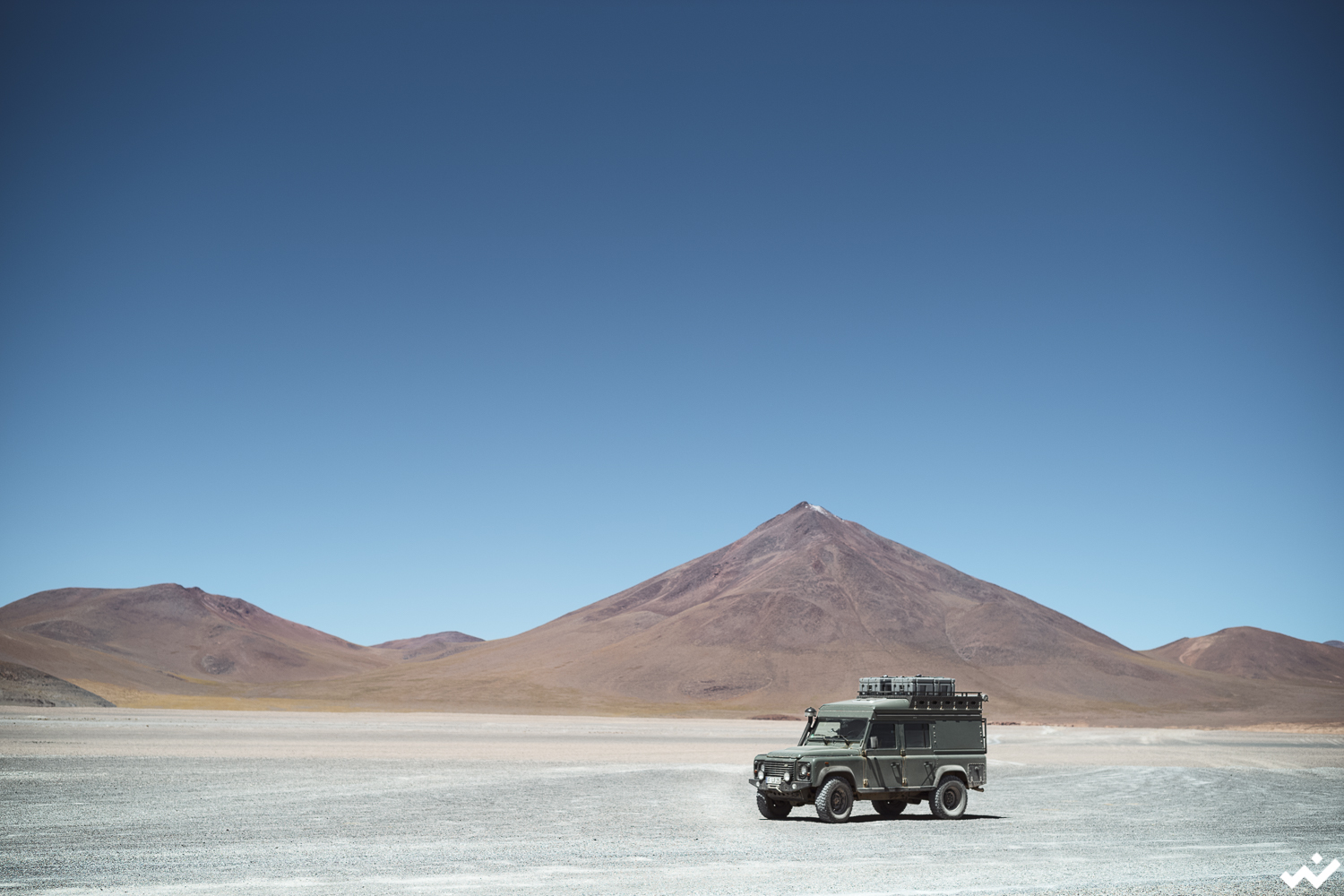 It is a myth that you are all alone on the Laguna Route. Ever. There are 70 to 100 Toyota Land Cruisers every day on the Laguna Route, transporting loads of tourists from A to B. The tours always follow the same route: Tourists are brought across the border from Chile to Bolivia where the Bolivian Land Cruiser drivers are waiting for them, taking them along the Laguna Route towards the Salar de Uyuni. Alternatively, tourists book a round trip from Uyuni through the Altiplano. This means that at certain times there is literally a traffic jam. No solitude. And if there is no solitude, you do not need to worry about being stuck in an emergency without help. If you get stuck, the next vehicle will help you. If you run out of gas, the Bolivian drivers will gladly sell you a couple of litres. If anyone thinks there is no infrastructure along the route, you are wrong. There are a whole number of hostels and some quite exclusive accommodations along the way. Which means there is always a warm place to stay, with something warm to eat. And consequently a large number of tourists.

As you can imagine, we were seeking to escape this. For this reason we were the first ones at the border and put up with a bit of a wait in the morning cold. Waiting at the border post we realised that Humphrey was losing some fuel. Not much, and we could not be bothered as the altitude really did not allow us to deal with the topic any further. We had other concerns. 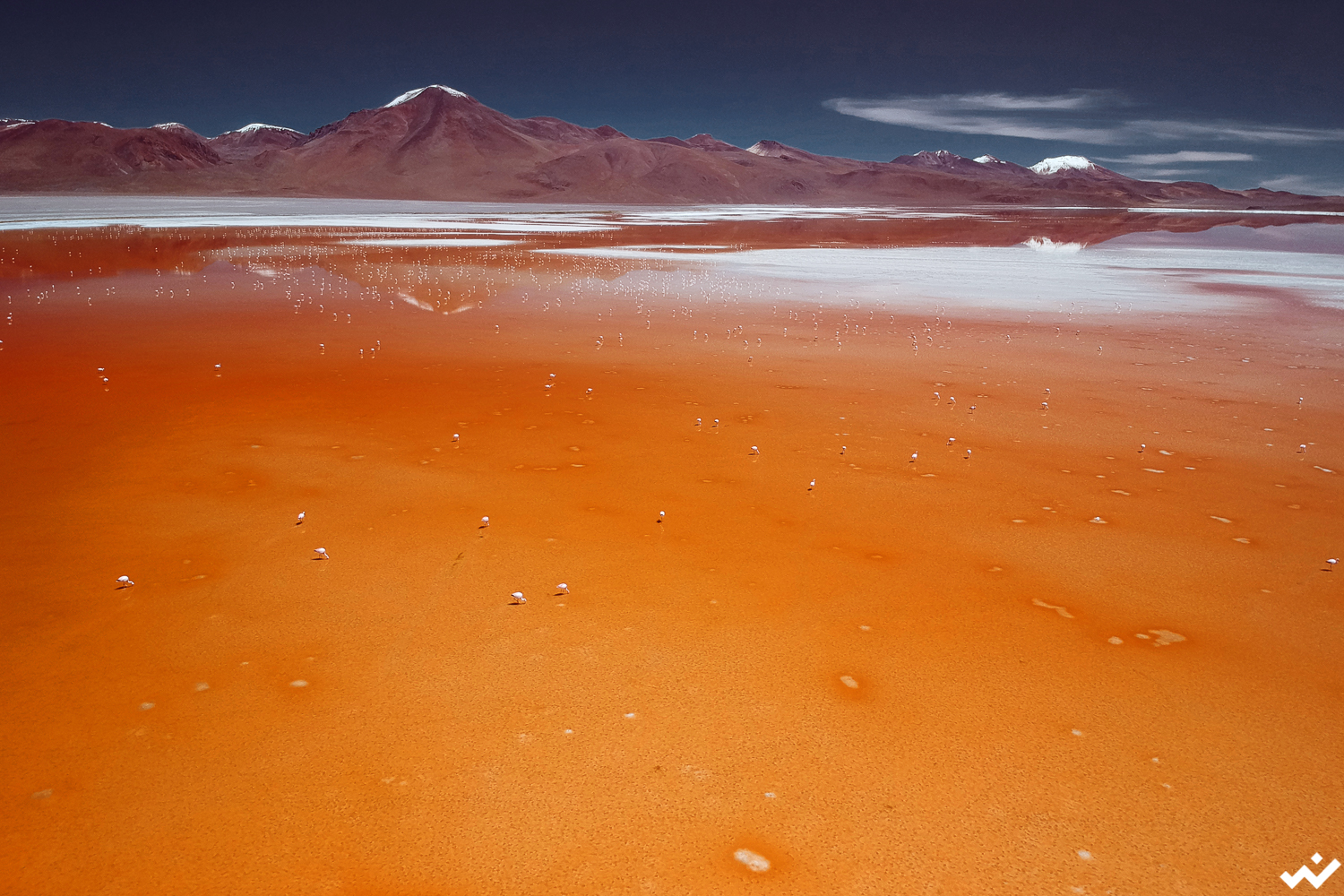 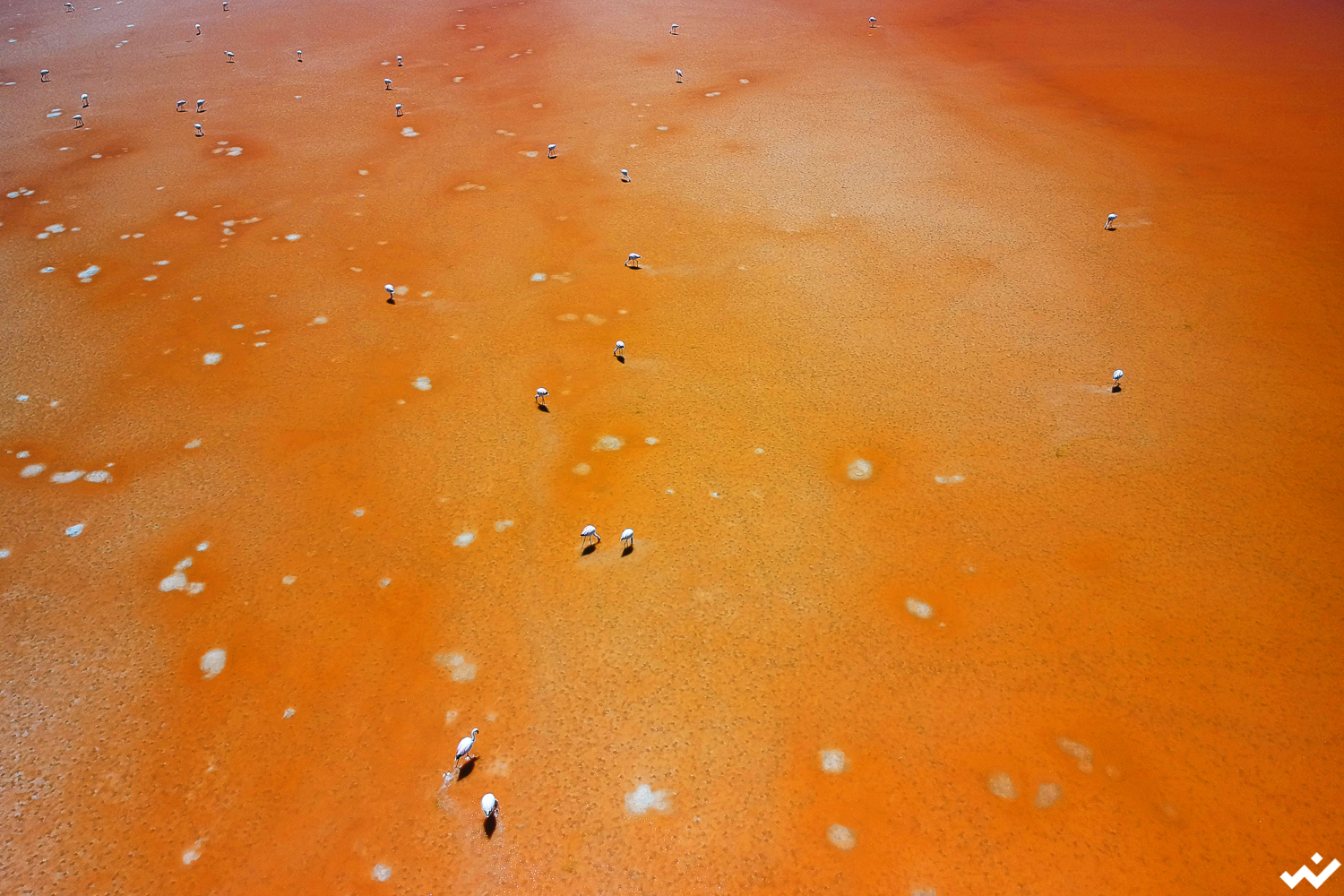 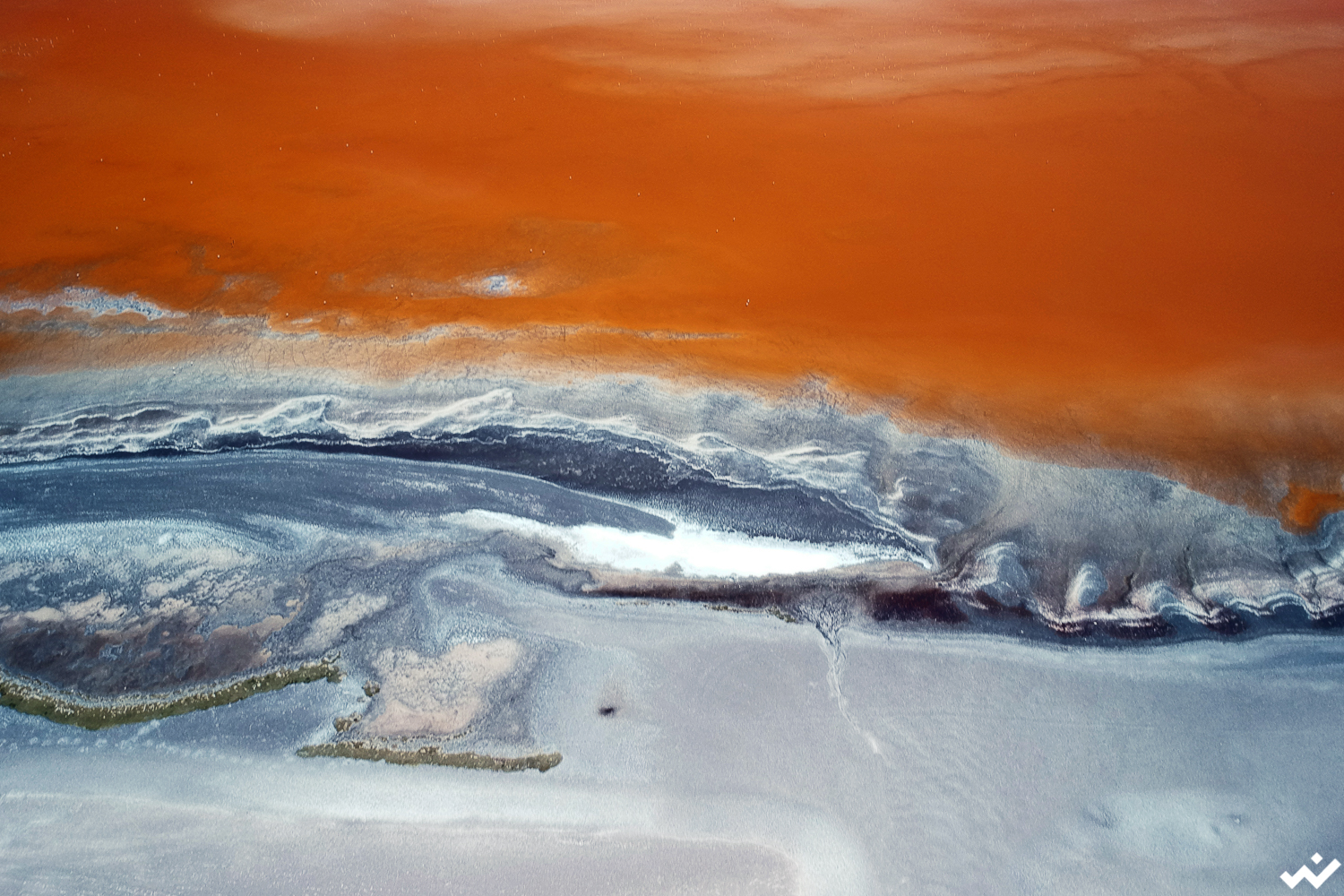 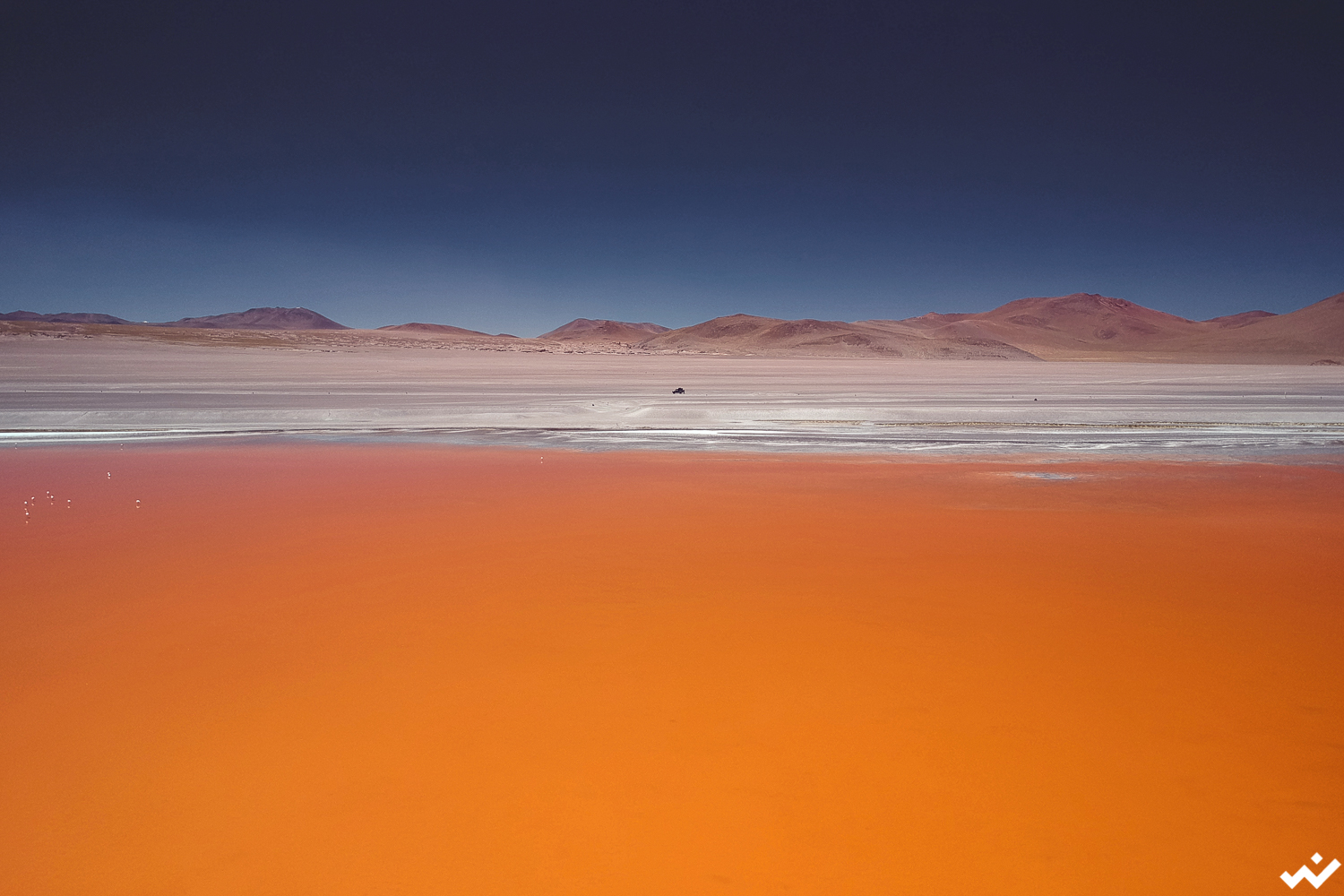 We were the first ones to cross the Chilean border that day, only to be waiting on the Bolivian side. At that time, we thought we had miscalculated. The Bolivians are not an hour ahead but rather an hour behind Chilean time. Which means we were the first ones to leave the Chilean border post at just after 8:00 am but had to wait at the Bolivian border post for roughly an hour, as the Bolivian border post only opens at 9:30 am according to Chilean time. But again, we did not have the energy to think about it much. Our senses were affected by the altitude, to think about it was way too exhausting. It was a bit like dealing with the time change to or from daylight saving time after having been heavily drugged. It inevitably leads to confusion and chaos. We therefore just waited. During this wait in the vast nothingness – that’s what the Altiplano genuinely is – more and more people gathered at the border. The Land Cruisers came from the Bolivian side and the tourists from the Chilean side. 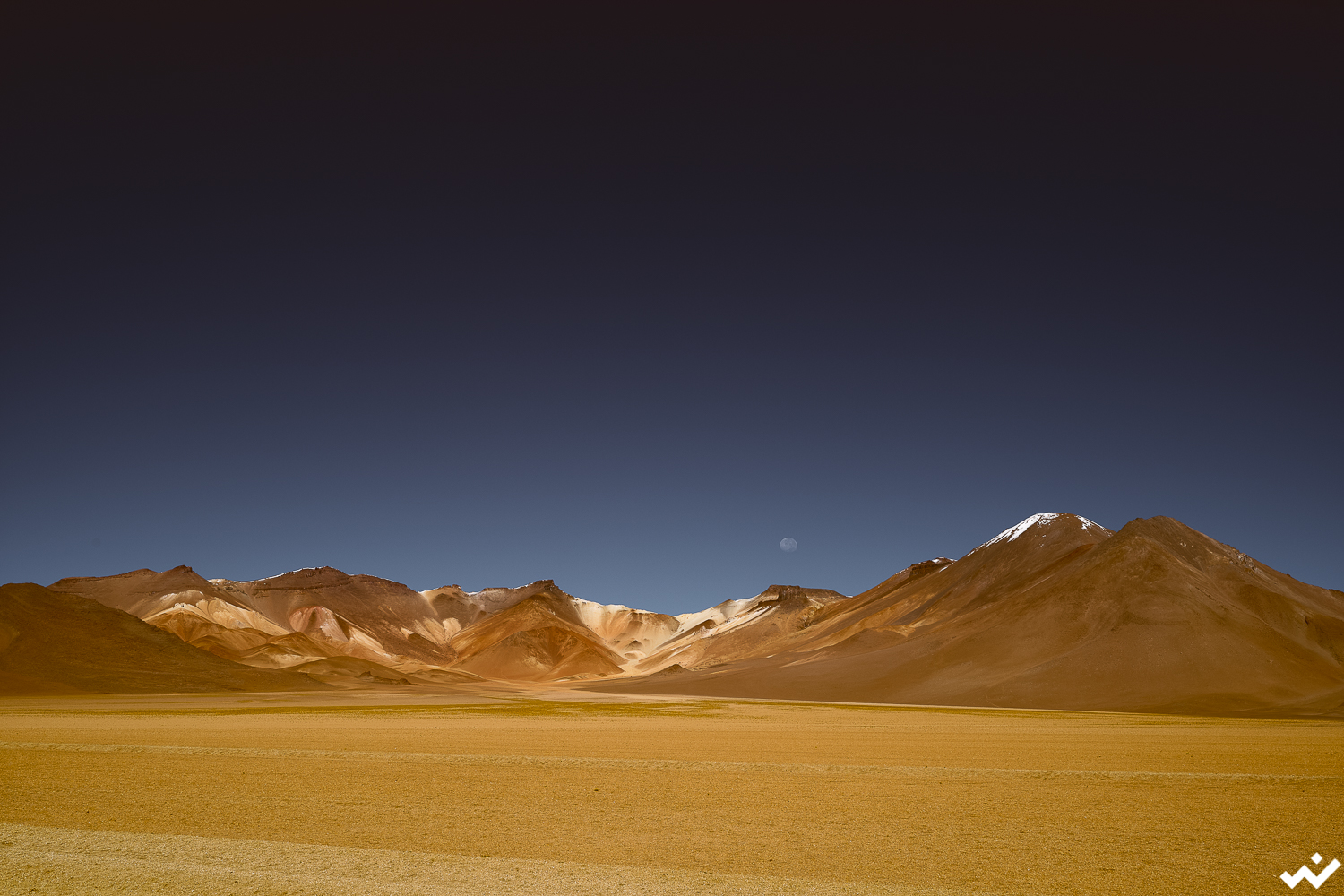 Luckily we spoke to Camillo, a tour guide for photographers who has spent a lot of time in the altiplano, a day before our departure. He recommended that we should deviate from the Laguna Route to enjoy some solitude and also to see some different landscapes than one laguna after the next. And that is what we did.

Regarding the landscape, the Laguna Route or the southern Altiplano in Bolivia is unique. It was really like driving on the moon. And once we had escaped the Land Cruisers, we really had the impression of being all by ourselves on the moon. And then add that odd feeling of moving at an altitude of around 4,500 meters all the time!

Our breakfast break at the Laguna Colorada was quite stressful. We had to head up a small hill with our breakfast in hand for the right kind of view. Literally everything is stressful at this altitude. Every step takes effort and there is that little voice within you that would like to put an end to this right here and right now. Which explains the look on our faces.🤪 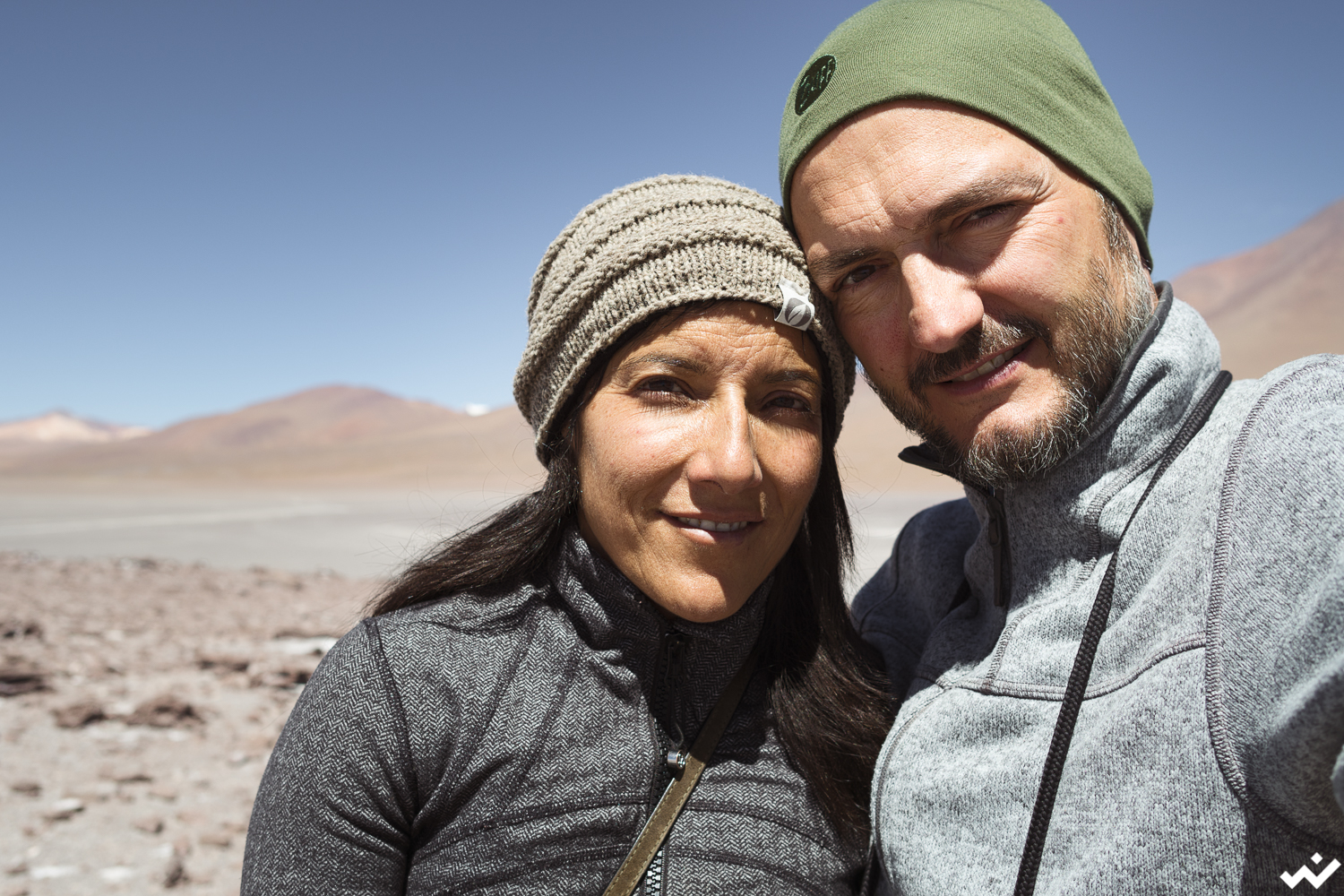 We continued cruising through the Altiplano on the worst imaginable gravel roads and tracks. The roads are not challenging to drive per se, it is not offroad driving in the true sense. The tracks are just in a miserable state, torturing the driver and the car. Again the myth is a myth with no relation to reality. 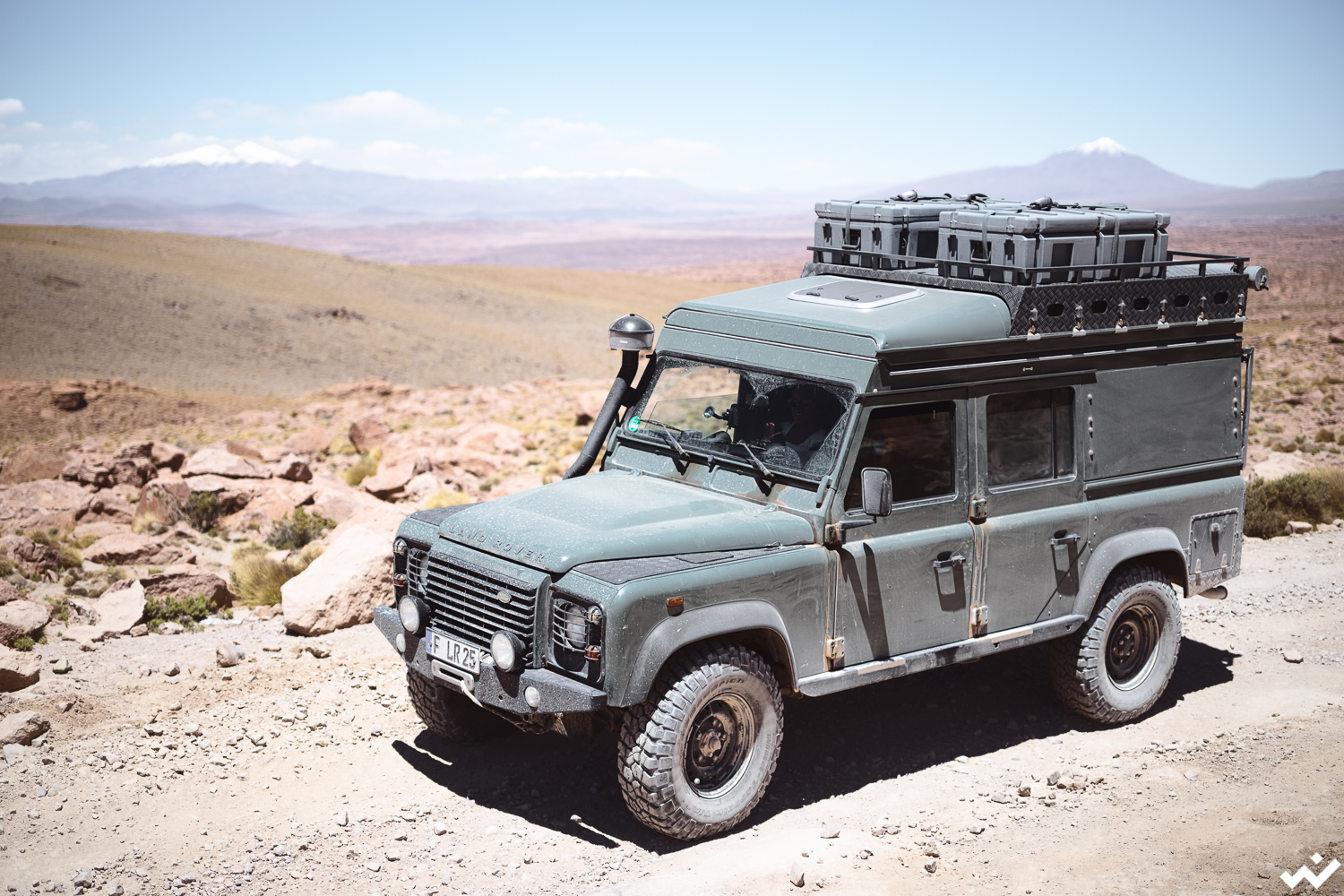 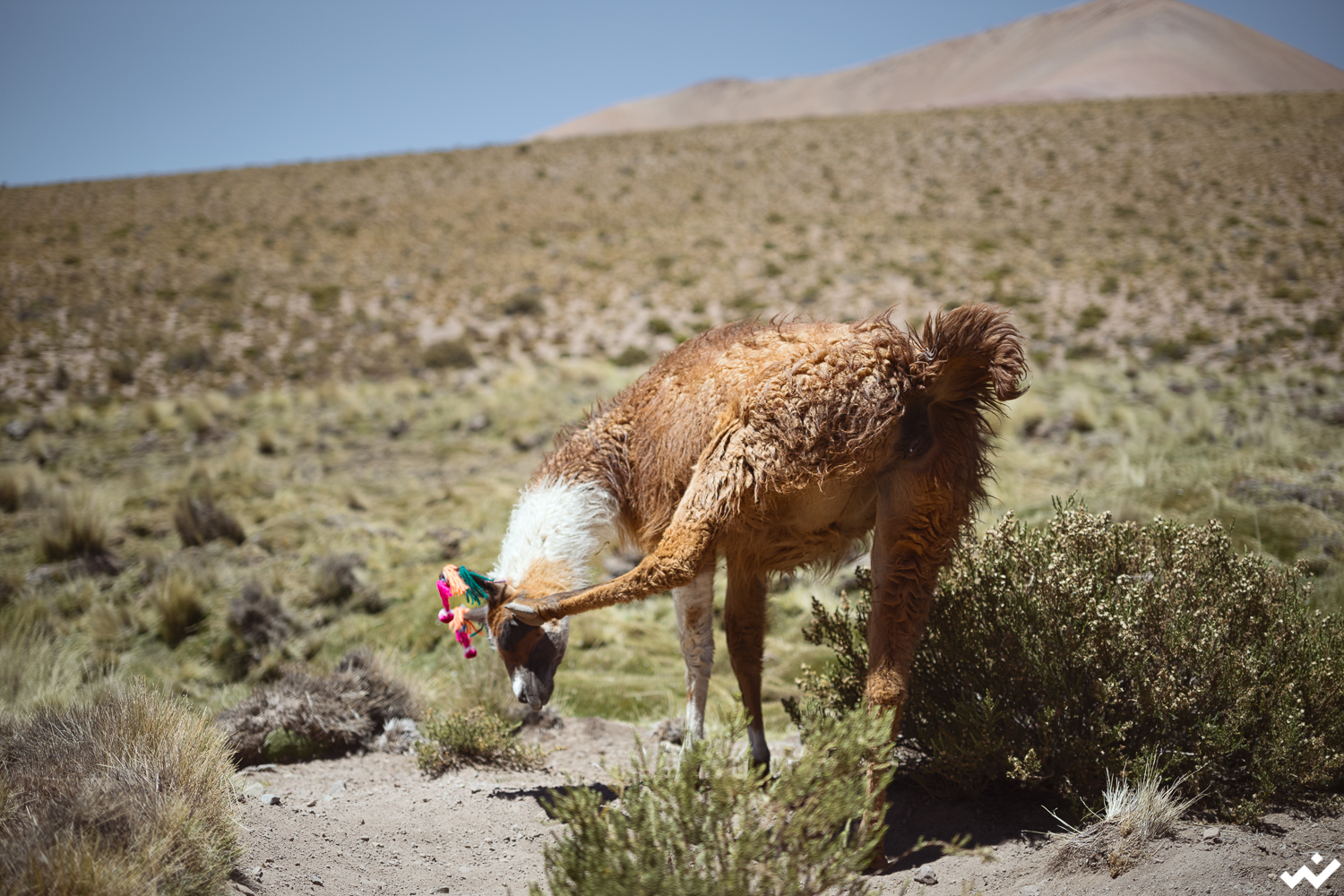 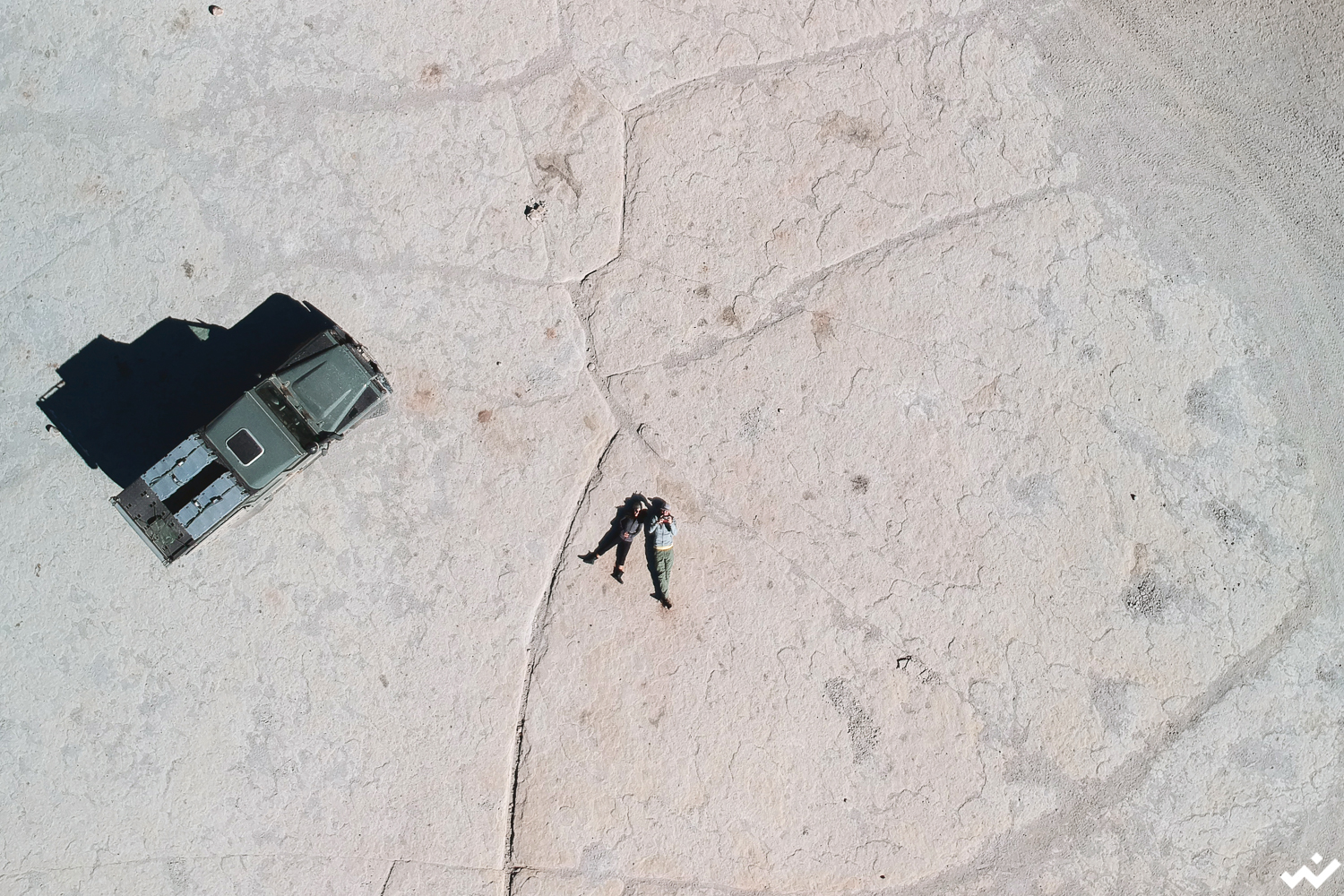 As we are restless and the reality of the road was quite different to the myth, on the first day we basically covered the distance we had intended to drive in two days. Not least as we wanted to get to a slightly lower altitude as the navigator struggled with the altitude for the first time on this day. Our campsite for the night was one of the best on our entire trip. A true oasis, all to ourselves, a perfect site called Catal. 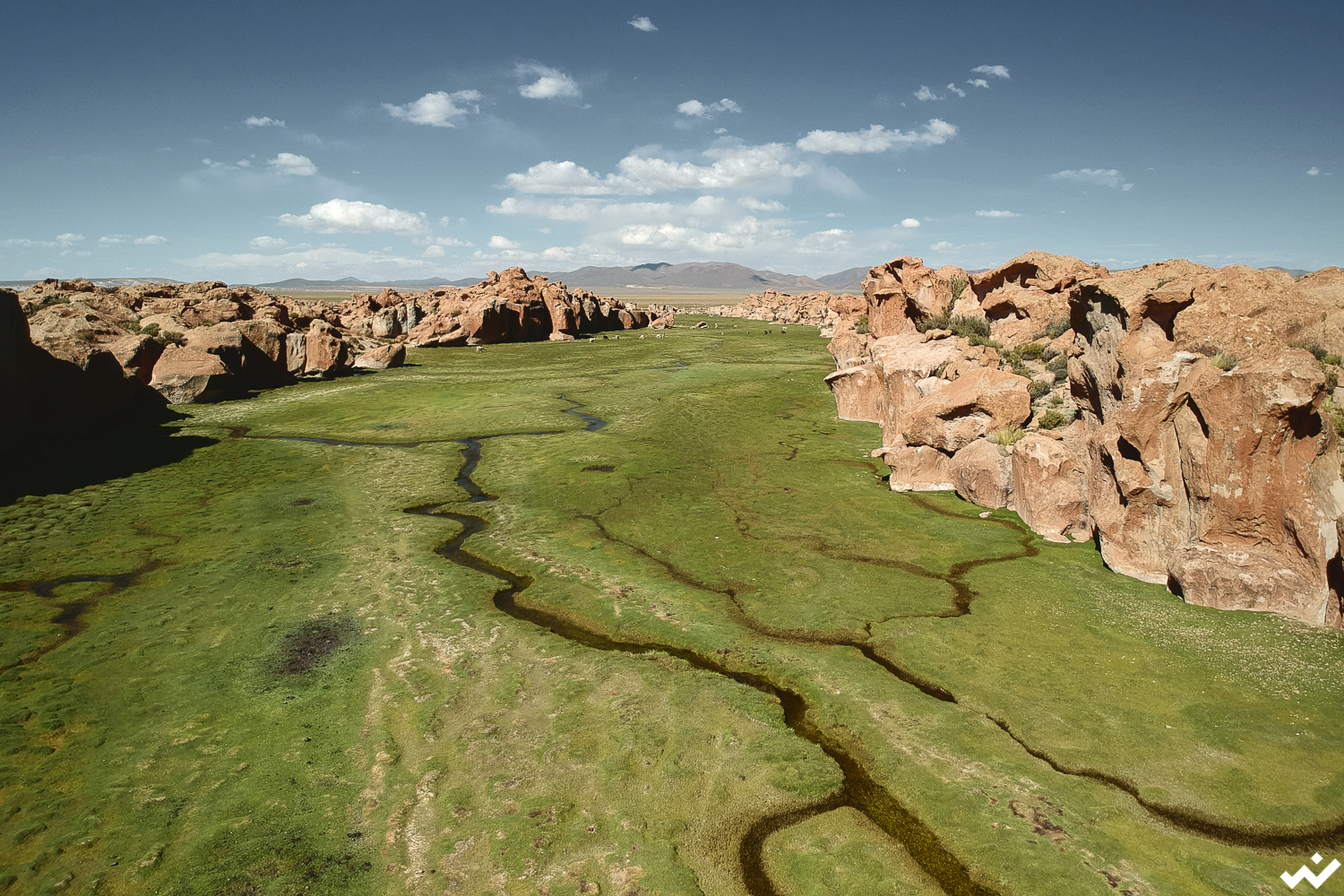 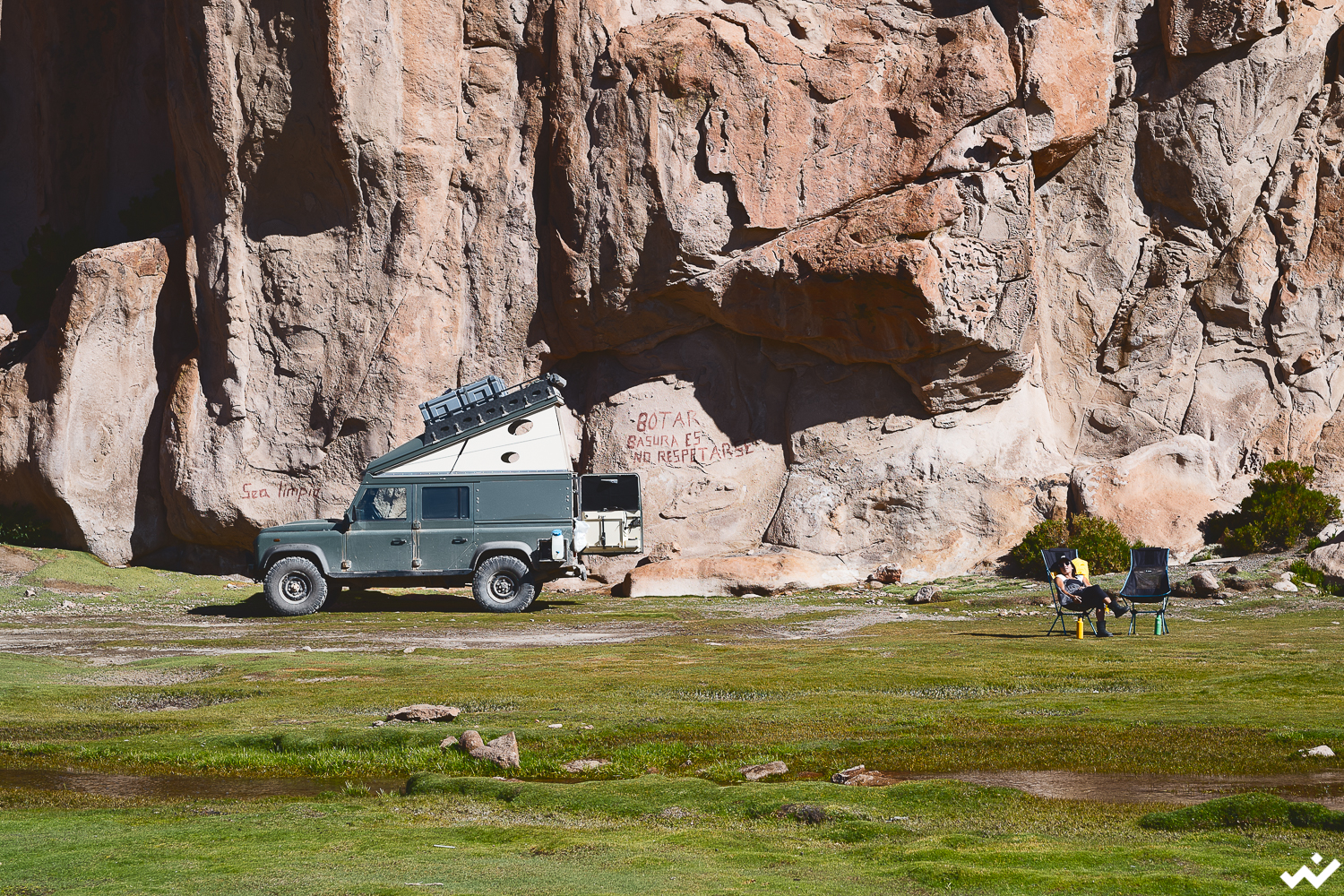 The next day I finally could drive offroad for once. Using diff lock and low gear. On our entire tour we really did not need any of this. 4WD is quite useful, just as high clearance is, but everything else is not really necessary for a South American road trip. In the Valle de Las Rocas there is a beautiful loop that according to the tracks had not been driven by anyone in quite a while. I finally could enjoy Humphrey and his strengths. 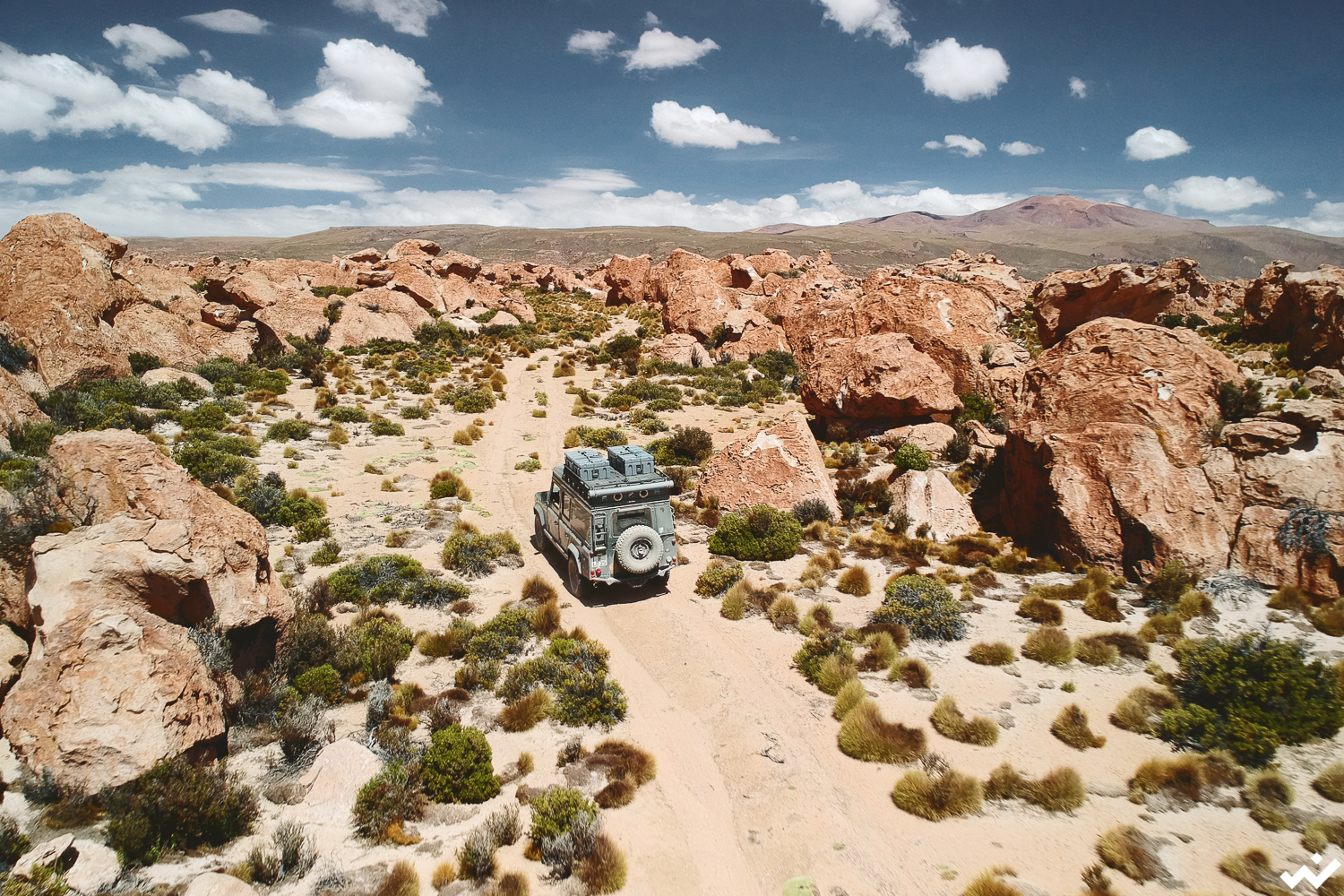 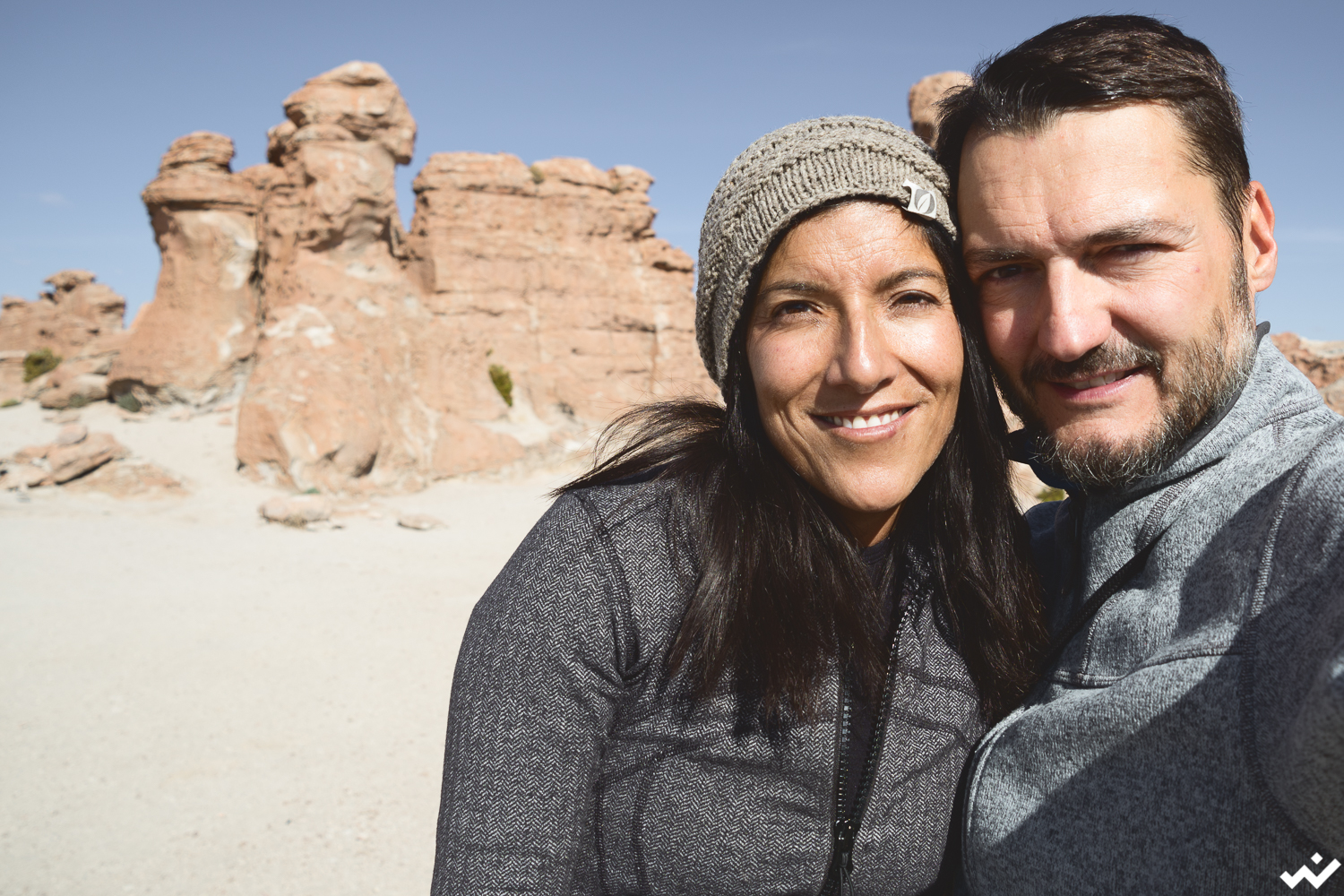 After this short but really beautiful side trip we drove past quinoa fields towards the Salar de Uyuni. The state of the roads did not improve and we were starting to get fed up with it. But finally we reached one of these roads financed by one of the mining companies. They need decent roads for their trucks obviously, and therefore they just build them. Good for us, we felt that we had suffered through enough of corrugation. 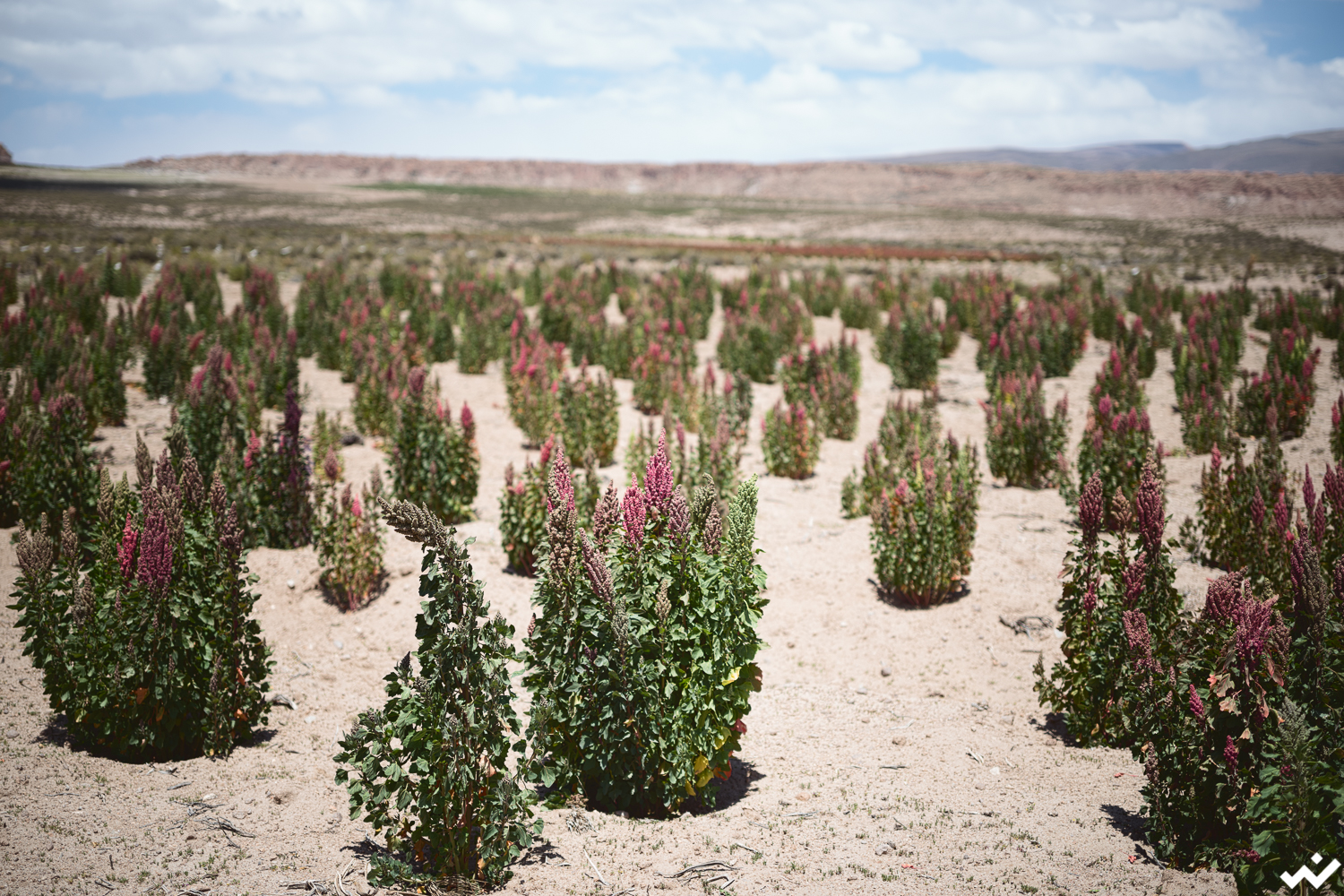 Unfortunately though it was not quite the end of it: Just before Uyuni town, it started raining cats and dogs and the world seemed to be coming to an end. I guess everyone will agree that Uyuni is a sh…hole, and the rain surely did not improve the situation…

We originally intended on driving through the Salar de Uyuni to Uyuni town but Camillo as well as the drivers we spoke to en route said that the Salar currently is flooded and therefore can only be entered via Colchani (near Uyuni town) at this time. As the Salar is a salt flat and salt basically is the worst that you can do to your car, we at some point just had to accept that Humphrey would not be driving across the Salar. Instead we used a toy car for our shots as we did not want to suffer the same fate as another overlanding couple who did not heed the warnings and drove onto the salt flat. They were stuck in Uyuni for four weeks waiting for spare parts for their car having fried their entire electrics with the saltwater… 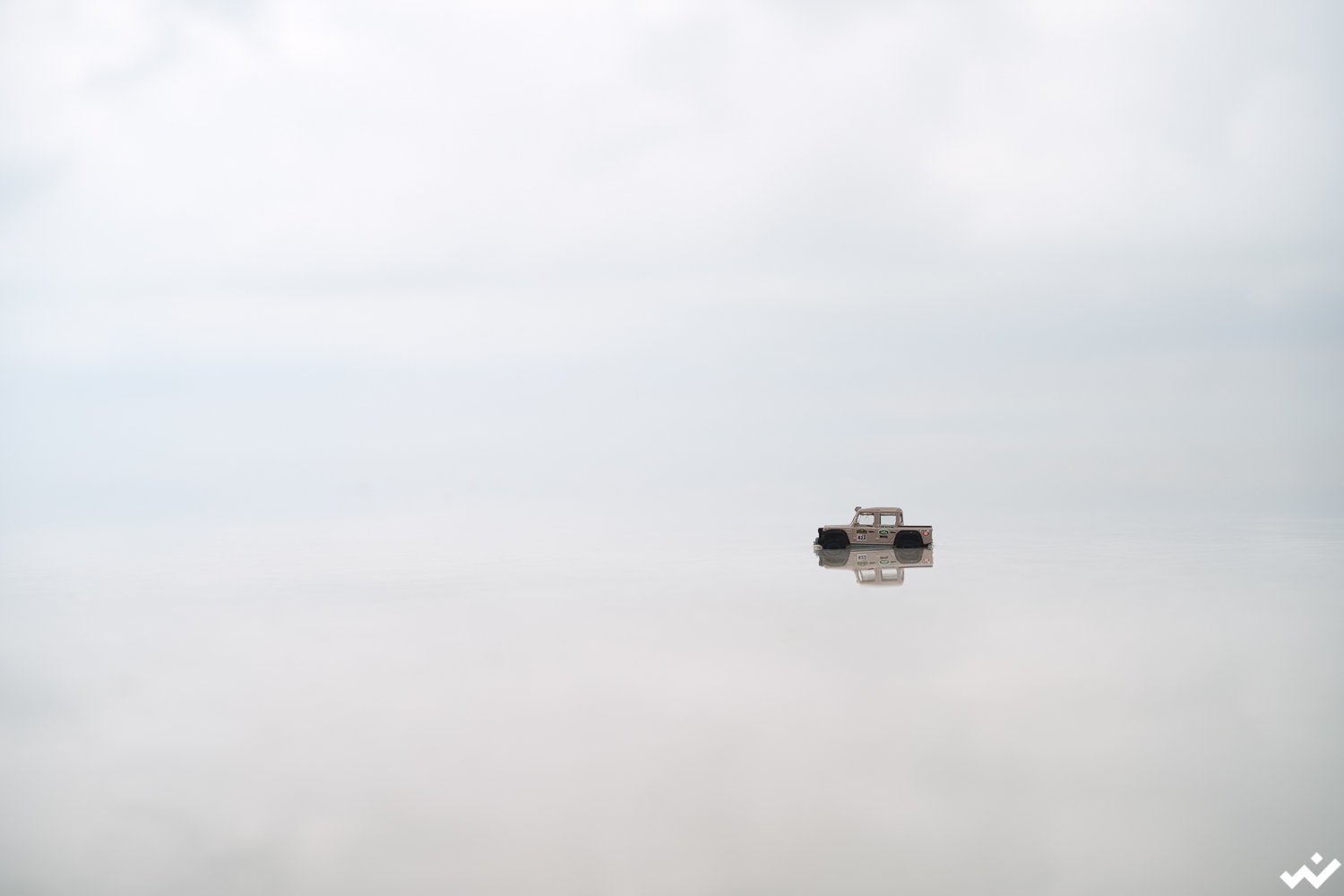 Because of the rain, we knew we also would not be able to spend a night star gazing on the edge of the Salar. We therefore spontaneously booked ourselves into one of the salt hotels on the edge of the Salar. The 4 km road leading to the hotel was a nightmare. One track on a tar road, one pothole after the next (or rather potholes divided by bits of tar). We all suffered and were cursing the road, the weather, the Salar and the hotel.

For the next morning, we booked a Land Cruiser with a driver to take us into the Salar. And somehow – not least as the weather was not so great – we were not that impressed. People around us were taking those photos of reflections, that’s what everybody comes for. But in the end it is always the same stuff over. 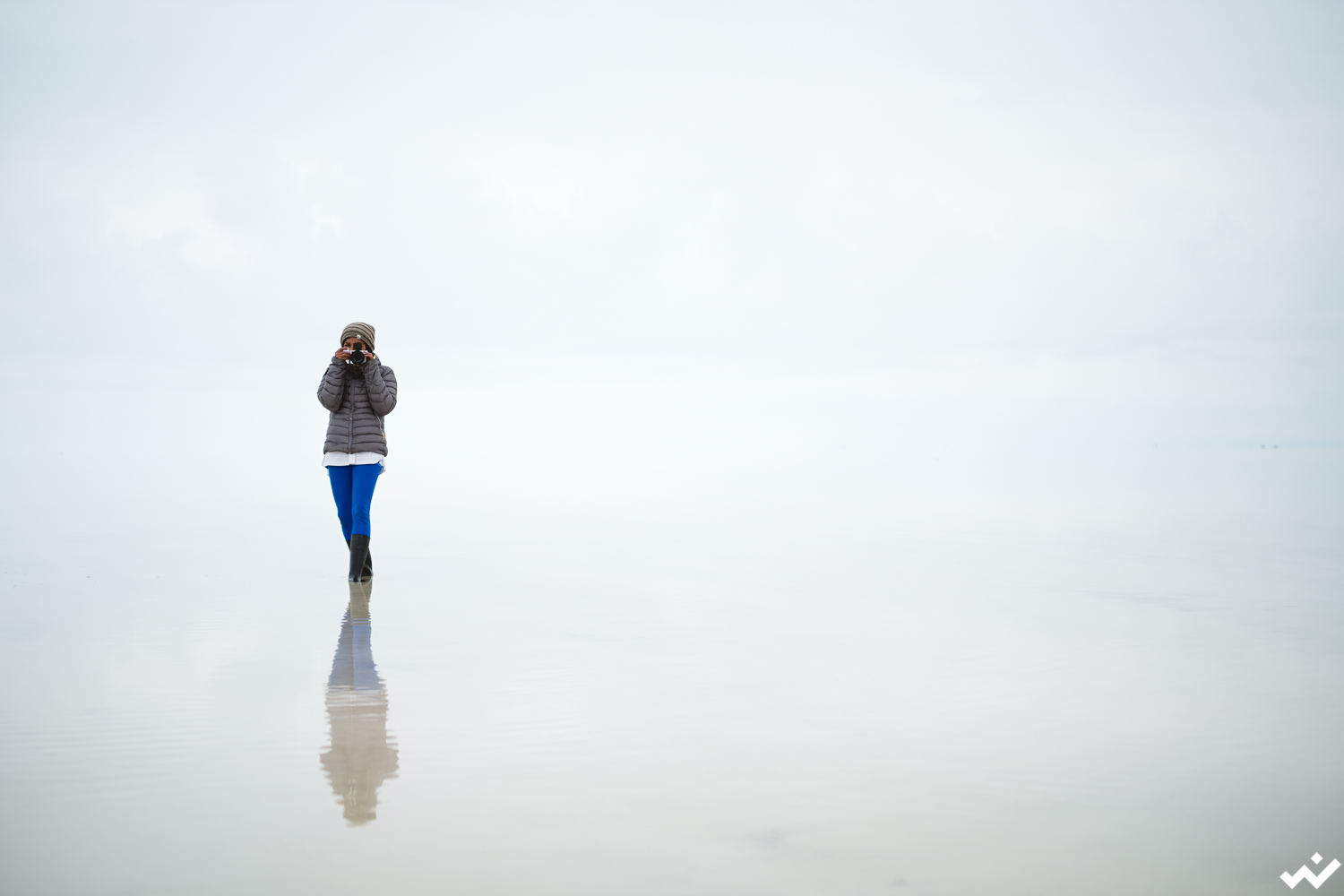 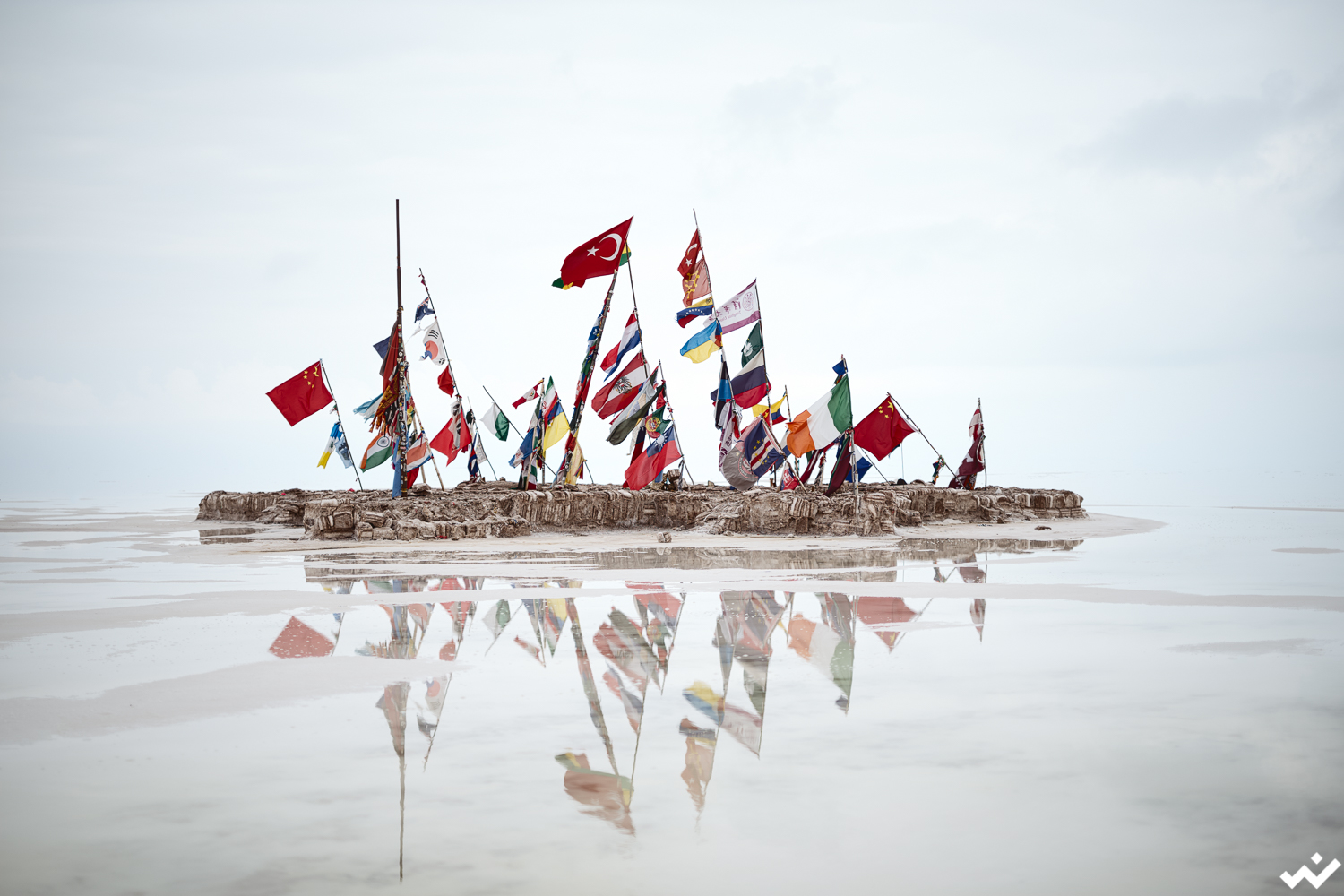 For the first time on our trip we felt that we were over-saturated. That we have seen too much. And that the typical tourist highlights just are not our cup of tea and that these places generally are overrated. Myth and hype.

We ticked the Salar de Uyuni off our list and continued on into the heartland of Bolivia. More on that in our next report. 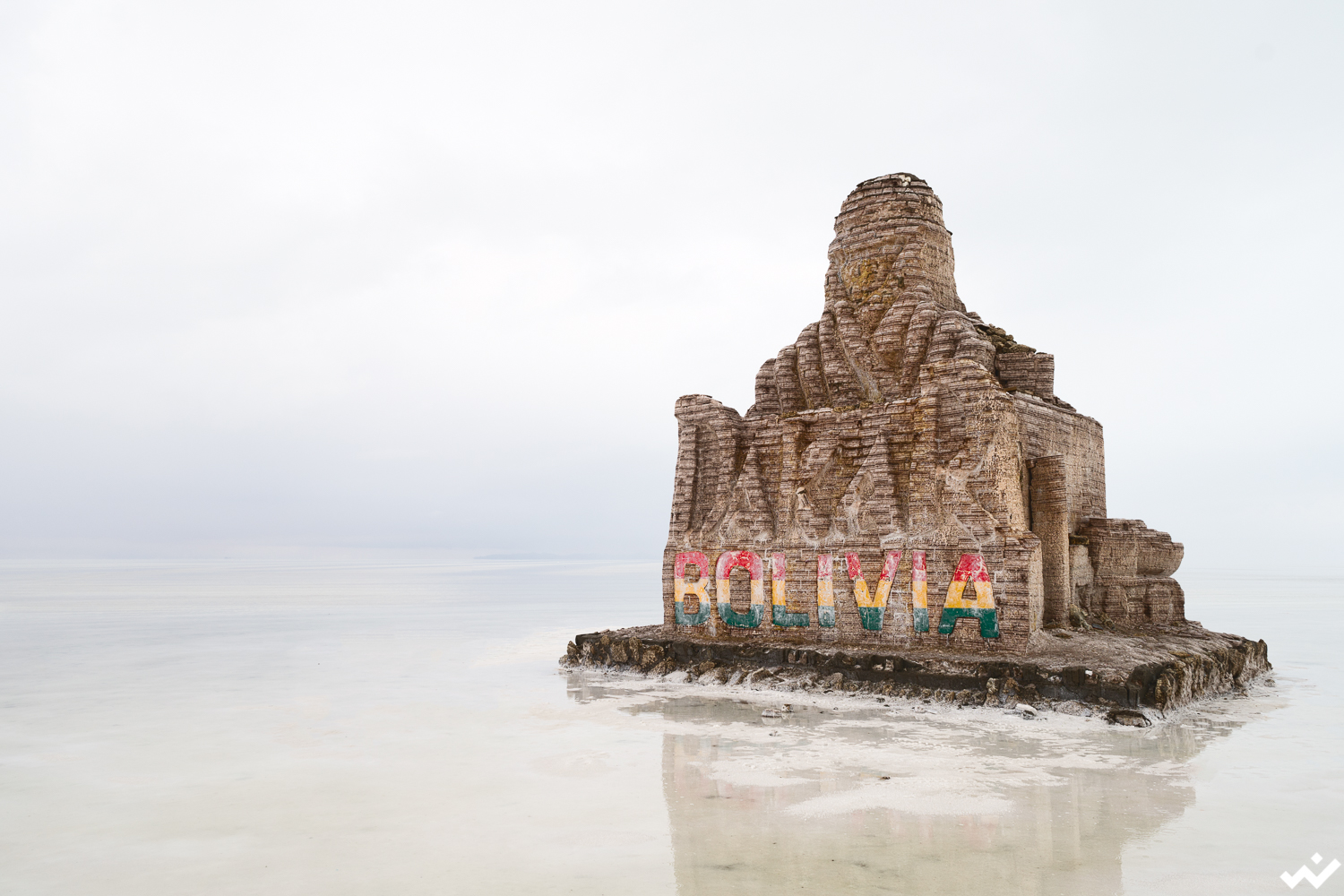